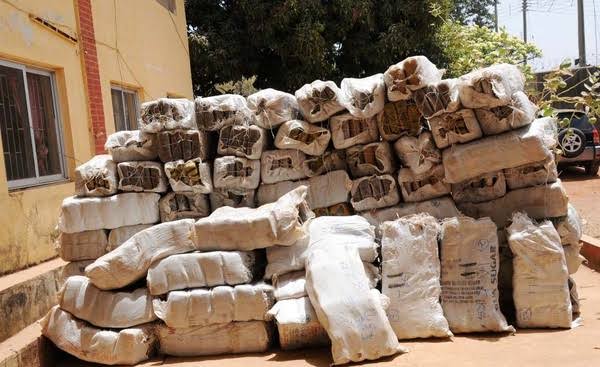 The use of hard drugs or restricted substances and their trafficking have undoubtedly gained notoriety among some young Nigerians, many of whom are caught in the net of their negative consequences.

Records of drug crimes in Nigerian courts show how deeply drug abuse/trafficking have corroded the tissues of society.

The United Nations Office on Drugs and Crime (UNODC) defines drug trafficking as an illicit trade that involves the cultivation, manufacture, distribution and sale of restricted substances.

Drug abuse is the use of illegal drugs or the use of prescription or over-the-counter drugs for purposes other than those for which they are intended, or in excessive amounts.

In Nigeria, the National Drug Law Enforcement Agency (NDLEA), established by Decree 48 of 1989, is charged with eliminating the cultivation, processing, manufacture, sale, export and trafficking of hard drugs.

According to the NDLEA, any drug with psychotropic effects is listed as restricted.

Some of the prohibited substances on the NDLEA List are cannabis sativa, heroin, cocaine, codeine, tramadol, methamphetamine, rophynol, extol 5, diazepam, and ephedrine.

These drugs are considered to have high psychotropic effects and their use is restricted.

Unfortunately, many more young people seem to have found comfort in using hard drugs for personal and business gain.

The 2018 National Survey on Drug Use indicated that 14.3 million Nigerians, representing 14.4% of the country’s population, used psychoactive substances in addition to alcohol.

The effects of hard drug use include an increase in criminal activity, including cyber fraud.

Drug abuse and trafficking is of concern to governments, community leaders, parents, schools, and other stakeholders.

According to the attorney for NDLEA, Lagos State Command Jeremiah Aernan, the rate of abuse of hard drugs by young people has become alarming. Aernan calls for collective efforts to deal with the threat.

He blames the ugly trend in part on the influence of social media, adding that “Currently, social media has improved the distribution of hard drugs, as there are now drug dealers online. So you find out that once these young people need drugs, they just order online the same way you order online shopping items.”

Research reveals that these hard drugs are sold under code names.

“They can say I want to buy a pencil and the delivery man knows what he means; then it is seen that social networks have facilitated, in no small measure, the trafficking of these drugs,” he says.

Mr. Aernan also blames the tendency for peer group influence which, according to him, pushes some young people into cult activities with the resulting effect of illicit drug use.

According to him, while some young people engage in drug use in order to have an “experience,” out of curiosity, others become drug lords for financial gain.

“Unemployment is another cause of drug trafficking. Many people have taken drug trafficking as a business; so it now goes beyond its use to derived commercial benefits. If you check the volume of hemp consumed daily in Lagos alone, you find that it is more than 100 bags.

“So if someone who sells hemp can make a profit of N3,000 or more per day, do you think that person will want to stop?” he asks.

Aernan says that while there is a control on the importation of ephedrine, its abuse is also rampant.

“Codeine was originally used to make cough syrups, but rampant abuse of the drug led to its immediate ban. Some of these young people go ahead and buy cartons of codeine and drink straight just to ‘feel,’” he says.

According to him, some hard drugs now have variants that are also used by young people in an attempt to have new experiences.

“For example, there is a variant of cocaine called crack, which is a combination of cocaine, heroin, methetamine and other narcotics that our young people use. The drug recently intercepted in Lagos came from the high seas and exceeded two tons in volume.

“Now there is a great need for guidance from young people on the dangers of drug trafficking. It also requires parents to verify their wards’ schedules and to keep a close eye on their commitments,” he advises.

Also speaking, Osariemen Amadasun, attributes the high rate of drug crime to uncontrolled use of the internet, adding that many young people use the internet for the wrong reasons.

She believes that drug abuse goes hand in hand with the cybercrime known as yahoo yahoo, of which she is convinced that young people are at the center.

“Some of these young men and even women stay up at night watching their laptops for the next gullible individual to fall victim to their scams. They will ingest substances to keep the mind and body awake. In their jargon, it is to be awake like a fish waiting for the next mugu.

“More concerning is the fact that these young people even cook their meals with some of these hard drugs, ingest and inject them just to get a deeper feeling. It becomes a complicated case to try to rehabilitate these drug victims, as some of them see and feel that their body systems are shutting down.

“The danger of using drugs is that once it starts, it is almost impossible to stop; parents must be aware of their responsibilities,” he urges.

A nurse who worked at the Federal Neuropsychiatric Hospital, Yaba, Lagos State, Ifeyinwa Nwachukwu says: “Many psychiatric cases that we find in hospitals are caused by drug abuse. As a psychiatric nurse, I have been left with drug victims; By how they behave, one can easily tell that they have been on hard drugs.

“Although with medications, some of these drug users become relatively stable, it is better that young people are properly oriented so as not to deepen in the ingestion of any form of illicit substance. Its negative effects are long-lasting,” she warns.

She suggests routine seminars and other enlightenment campaigns on the negative impacts of hard drugs as a strategy to stem the wave of drug-related crime.

Ms. Nwachukwu reports that seminars can be held in schools, hospitals, health centers and religious centers.

A 22-year-old rehabilitated drug victim, Kings Uzoma, recounts that he became addicted to drugs in 2019 after establishing a small computer operating company.

According to him, his work schedule made him have new friends. “We lived around Agric in the Ojo de Lagos area. When I started having large customers, who stay in my store until the evening when it should be closing, I became interested in what they were doing.

“Later, I left my parents’ house in Ojo and went to live with them on Victoria Island, where they introduced me to eat rice cooked with Codeine. From there, we traveled to Ghana. In Ghana, I no longer understood what was happening to me. One day I woke up and found myself back in Nigeria with bruises on my body,” he said.

According to him, a hospital prescribed medicine before he regained his senses.

According to him, judges hand down sentences as small as six months in prison or a fine for drug trafficking.

He believes that such penalties have not served as a sufficient deterrent for drug offenses.

The lawyer says that while Nigeria should not punish drug crimes with the death penalty, the country should show a strong will to confront the threat through strict punishments.

At the annual dinner of the Institute for Change Management in Lagos in December 2021, Marwa said: “It is worrying that some of our officers lose their lives in the course of the fight against drug traffickers, but at the end of the day, some of these offenders when they are brought to trial, they are only fined and then return to the same business.”

According to Marwa, the hard drug problem in Nigeria is huge. “Basically, we have to close the pipeline. In other words, take the traffickers and their barons out of the picture. We have to embark on an aggressive drug supply reduction campaign.

“It is to this end that we launched the War on Drug Abuse campaign that, in the long run, will help prevent the entrenched culture of drug abuse among the youth of society,” he said.

The analysts call on parents, guardians, caregivers, school administration, religious leaders, non-governmental organizations, corporate entities and others to join forces with governments to control drug crimes to save young people, the leaders of tomorrow, of its bad consequences.

They also urge changes in policies and legislation that will stem the wave of drug-related crime.