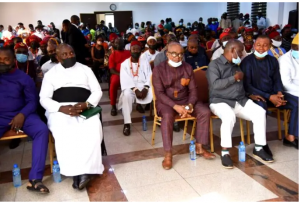 Governor Ifeanyi Ugwuanyi of Enugu State, has reiterated that Justice, equity shall prevail in 2023 general elections as the people of Awgu Egbeleli in Awgu Local Government Area, led by the Council Chairman, Hon. Pedro Nwankwo, paid him a Thank-you/solidarity visit on Wednesday.

It would be recalled that Gov. Ugwuanyi had during the Oganiru Enugu East Senatorial District rally on 2023, declared that “in the fullness of time, dialogue, justice and equity shall take pre-eminence”.

The well-attended Enugu East Senatorial District rally which was convened by the Speaker of the Enugu State House of Assembly, Rt. Hon. Edward Uchenna Ubosi, demanded that it is the turn of the zone to produce the governor’s successor in 2023, based on the long established rotational template.