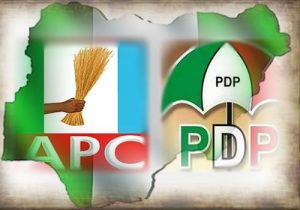 The ruling All Progressives Congress APC has knocked the Peoples Democratic Party PDP and its presidential candidate in the 2019 general election, Alhaji Atiku Abubakar for thinking that they can come back to power, saying Nigerians are not ready to go back to Egypt.

The former Vice President had on Wednesday met with the Rivers State Governor, Nyesom Wike in Port Harcourt, the state capital.

After the meeting, Atiku said Nigerians are waiting eagerly for his Peoples Democratic Party to take over power at the federal level in 2023.

READ ALSO: We are positioned to serve Nigeria better – INEC

“Well, I came here to reconcile with the governor on party affairs and how we can ensure that there is unity and stability in the party.

“So, that we can take over government in 2023. I believe that Nigerians can’t wait for 2023 to come so that PDP will return”, Atiku was quoted to have said after the meeting.

However, APC in a statement by the National Secretary of its Caretaker Extraordinary Convention Planning Committee CECPC, Sen. John James Akpanudoedehe on Friday said nothing good can come out of the PDP.

“Alh. Atiku Abubakar ought to know that Nigerians can never return to Egypt again. They cannot vote for the PDP in 2023, they have tested the party and known that it is a failure.

“In other words, nothing good can come out PDP. They were there for 16 years without anything to show for it. The achievements of our party in the less than eight years in power has eclipsed the PDP 16 wasted years. APC is not in the class with the PDP in many ways”, the ruling party declared.