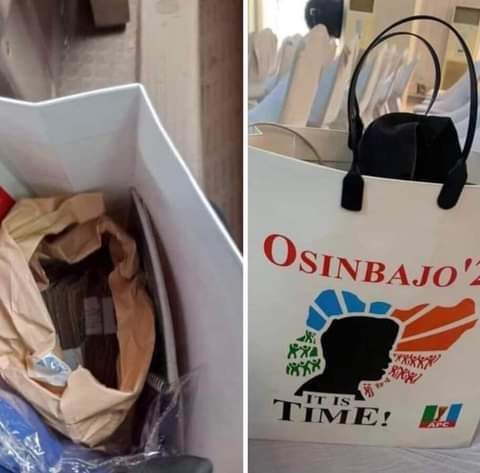 It was a happy day for the elected party officials of the All Progressives Congress, APC, in Oyo who attended the meeting with Vice President Yemi Osinbajo on Friday as each of them went home with a sum of N250,000.

It was gathered that this coupled with the words or assurances and intimidating  political credentials pushed before the delegates by the articulate Professor of Law.

Unconfirmed source said the money was the minimum the least of the delegate got while some others got higher, especially party leadership at the state, Zonal and national level who are from the state.

The consultation meeting with the delegates among other stakeholders held at Ibadan Civic Centre, Idi Ape, Ibadan, Oyo state capital city on Friday.

In several photos shared online by some members of the APC who got the largesse, the huge cash was seen in the package that was distributed by the Osinbajo campaign team.

Osinbajo had before the meeting, visited Olubadan of Ibadan, Oba Lekan Balogun, who prayed for him that he will succeed president Muhammadu Buhari in 2023.

The donation is coming in preparation for the APC presidential primaries slated for June, 2022.

A political observer expressed worry with the development saying, some other aspirants who might want to follow suit in wooing the delegates and other stakeholders would turn it into a competition of a sort by attempting to surpass the standard the VP set.

He however added that, whichever way the pendulum swings, the act is an indication that it would be rain of money for the delegates before and during the presidential primary, expressing reservations however if the moneys would translate to electoral victory for the aspirants.