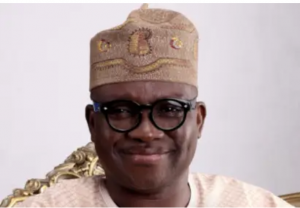 Dr Peter Ayodele Fayose, popularly known as Oshoko, is a Nigerian politician born on November 15, 1960. Though he grew up in Oyo State and had his education in Oyo State but he is a native of Afao town in Irepodun Local Government Area of Ekiti State and a two-term Governor of Ekiti State.

His grassroots experience is second to none. On two different occasions, Ayodele Fayose, defeated two incumbent Governors to emerge the Governor of Ekiti State. In 2003, he unseated Otunba Niyi Adebayo but he didn’t enjoy the Peoples’ mandate because his government was truncated by an illegal impeachment by the Ekiti State House of Assembly on October 16, 2006.

But after getting justice from the court over his illegal impeachment, he returned to power on June 22, 2014, when he defeated Dr Kayode Fayemi with a wide margin during the State Governorship election.

Ahead of the 2023 Presidential election, the Southern Governors Forum has now declared support for rotation and zoning of the Presidency to the South. Meanwhile, before this decision, the Presidency of Nigeria has always be rotated between Southern and Northern Nigeria which has been a traditional principle since 1999 to date.

Even where the stakeholders in Nigeria have failed to observe the principle of zoning, the electorates have always zoned it during the election with their votes.

This was evident during the 2015 Presidential election when ex-president Goodluck Jonathan of the PDP lost the election to his main challenger, Muhammadu Buhari, with just over 2.5 million votes.

The existence of traditional zoning principles in Nigeria was further attested to by Dr Jonathan, in his book titled: “My Transition Hours”, when he specifically accused some Peoples Democratic Party (PDP) Governors from the North of sabotaging his reelection bid.

In the book, Dr Jonathan lamented the desperation of some northern Governors in his party to return power to their region, he said that was part of the major reasons he lost the election to Buhari in 2015.

Now that the 2023 election draws near, the decision of the Southern Governors is an indication that the Stakeholders in Southern Nigeria and the electorates in the country, will not tolerate imbalances for the sake of justice, fairness, equity and unity of the country.

Looking towards the South in the PDP, ahead of 2023, I believe that Ayodele Fayose is the best for the party. Apart from being a southerner, the masses who are his fans and admirers cut across the 36 states of the country. This means he has the spread and chances of winning.

With the problem facing Nigeria today, the country needs to be restructured to transform the roles of the federal, state and local governments to solve the numerous socio-political, economic and security challenges besetting the nation.

Among the PDP voices from the south, Fayose is a known, strong, an unrepentant advocate of restructuring that Nigeria needs today. Apart from being a voice, he is a fearless man who could be trusted to take the bull by its horn in restructuring Nigeria.

We need a President who will speak the truth to us in Nigeria and solve our problems. Fayose is resolute. Nigeria needs a resolute President in 2023. We don’t need a man that will continue with the blame game. We need a man that already knows we have numerous problems and will be coming on board to solve them.

Ayodele Fayose is the best for the PDP if the party would consider a southerner as her presidential flag bearer in 2023.