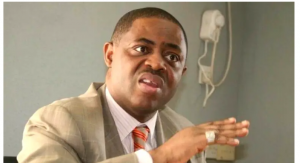 In light of the crisis rocking the ruling All Progressive Congress party, APC, a former Aviation Minister and PDP chieftain, Chief Femi Fani-Kayode has lent his voice to the party’s crisis.

Recall Vanguard had reported how stakeholders and some Chieftains of the ruling party disagreed over the method of conducting the just concluded party congress as well as who leads the party as the general election hits top gear, a scenario which saw the crisis in the ruling party deepens as the 2023 elections gather momentum.

The calls became persistent shortly after one of the Supreme Court judges in the Ondo gubernatorial election, declared that the position of Governor Buni as the interim chairman of the party is against the constitution.

But in a meeting headed by Vice President Osinbajo, as directed by President Muhammadu Buhari, the Attorney general of the federation and Minister of Justice, Mr Abubakar Malami had declared that Buni’s led APC is in total sync with the party’s constitution and as such, it will not affect the fortunes of the party before or after the general polls.

Reacting, Chief Femi Fani-Kayode who according to him “is speaking as a Nigerian and political observer” expresses shock over moves and calls for the removal of the Yobe State Gov as the Caretaker Chairman as well as the crisis rocking the ruling party, wondering why anyone would be against a party leader who has attracted several political heavyweights – three governors, many distinguished senators and formers ministers, including many honourable members of House of Representatives to the ruling APC by his excellent style of leadership.

FFK, in a series of tweets, warned that the ruling APC would be making a big mistake if Gov Mai Mala Buni is removed as the party leader.

said, “It amazes me that the Nat. Chairman of a pol. party that has attracted 3 Governors from the ranks of the opposition together with Senators, House of Rep members, BOT members, fmr. Ministers & other notables all in 1 year is being undermined by disgruntled elements in his party. The biggest mistake APC can make is to get rid of Gov. Mala Mai Buni as its leader.”

“I say this because he has done more for the credibility and strength of the ruling party than any National Chairman since its inception,” He said.

“Apart from being a formidable intellectual, a man of his word and an absolute gentleman, he is also a moderate, civilised, cerebral, fair-minded & focused individual for whom I have immense respect,” Fani-Kayode wrote.