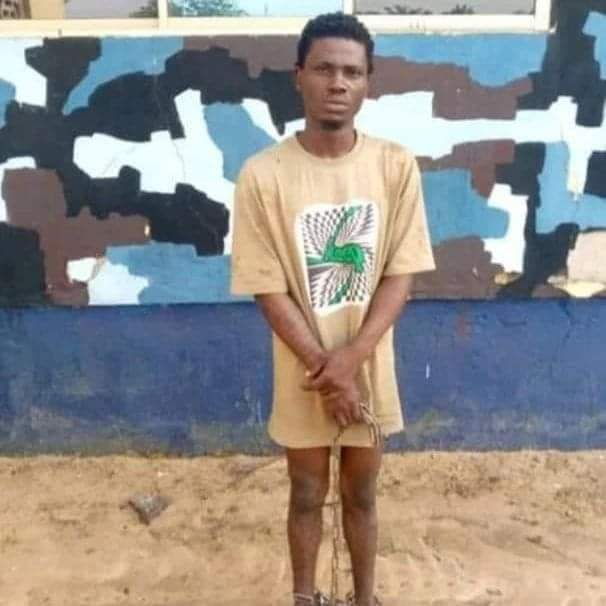 A 22-year-old female student of the Delta State Polytechnic, Ozoro, Gift Oloku, has been killed by her boyfriend during an argument an iPhone.

The incident happened at Etevie quarters in Ozoro, Isoko North Local Government Area of the state on Saturday, July 16, 2022.

The suspect identified as Godspower Adegheji, 23, allegedly hacked the deceased to death with a machete.

Spokesperson of the Sate Police Command, DSP Bright Edafe, who confirmed the incident in a statement on Sunday, said the suspect has been arrested and is currently in the police custody.

According to Edafe, the suspect killed the Gift after she mistakenly broke his IPhone while they were fighting.

“This is Godspower Adegheji of Etevie quarters Ozoro, age 23yrs, he killed his girlfriend Gift Oloku ‘f’ aged 22yrs in Ozoro using a machete after she mistakenly broke his IPhone 11pro max while they were fighting because she went out without telling him. He has been arrested.” the spokesperson stated.

According to The Nation, trouble started on Saturday night when the suspect accused the deceased of infidelity after she went out without telling him and a fight broke out between them, leading to her death.

The suspect took the corpse to the State General Hospital on Sunday morning where the victim was confirmed dead.

A source, who spoke on condition of anonymity said: “It happened today (Saturday) at Ozoro. A guy beat his girlfriend to death with machete. People said he was high that he didn’t do it with his clear eyes because he didn’t run away after killing her, instead, he rushed her to a general hospital

“I just confirmed that the girl is a student of the school, but the guy is not. Maybe he has graduated. The guy must have been on drugs last night. It was this morning that the guy regained himself. After seeing what he had done, he rushed the girl to the hospital.”

A video footage making the round online showed the lifeless body of the deceased lying on a stretcher while the suspect was being flogged by a mob.