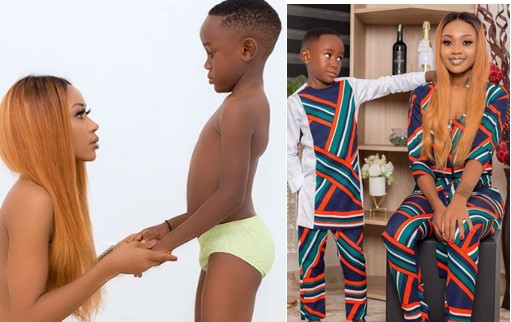 Ghanaian actress and socialite Akuapem Poloo has finally reacted to the criticism that trailed her nude picture in commemoration of her son’s birthday.

Akuapem has on Tuesday shared photo of her naked self squatting in front of her 7 year old son on to celebrate his birthday.

The viral photo caused a grave stir on social media as many people considered it as an abuse to the young boy.

Reacting to this, the CID has invited Akuapem Poloo as Children’s Right Group expressed haughtiness against the ‘dirty’ photo.

In three minutes fourteen seconds video sighted by Ghgossip on her official Instagram page, she claimed that the indecent photo was to send a message in an artistic manner to most especially children who shouldn’t hold back to cloth their parents no matter the cost and should stand by them always.

She stated that she baths together with her 7-year-old son and pleaded for any inconveniences caused by her actions.