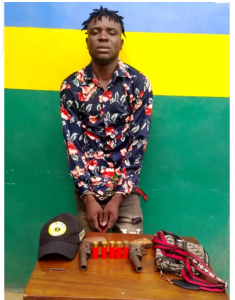 The suspect identified as Sunday Akpa was arrested at Iba in the Ojo local government area of the State by an eagle-eyed anti-crime patrol team of the Iba Police Division at about 5:30 pm on the 13th August 2021.

It was learned that the suspect who belongs to a notorious dare-devil armed robbery gang allegedly responsible for the spate of traffic robbery and sundry criminal activities in Festac, Mile two, Ojo Alaba, and Iba areas of the State, was travelling in a commercial bus apparently to join other members of the gang for an operation when he was apprehended.

Sensing that the game was up, the suspect on seeing the police team which had stopped the vehicle for a routine check, jumped down and took to his heels. He was however arrested by the policemen after a hot chase.

Confirming his arrest, the spokesperson Lagos State Police Command CSP Adekunle Ajisebutu said the two arms and the ammunition were recovered from him.

Meanwhile, the Commissioner of Police, CP Hakeem Odumosu, has directed that the suspect should be transferred to the Command’s Special Squad for in-depth investigation with a view to arresting other members of the gang.

While commending the policemen for their commitment to duty, the Commissioner of Police vows to maintain the onslaught on all criminals and other hoodlums still planning to ply their evil trade in the State.