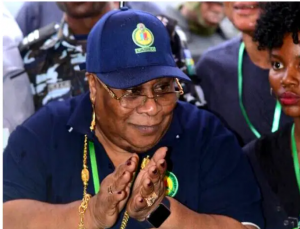 Speaking during a stakeholders’ forum for Ward F, LASIEC Chairman, Justice Ayotunde Philips, represented by the Electoral Commissioner, Dr. Bunmi Omosehinde, explained that the reason for the rerun in the ward was because there was no clear winner.

“You know we are just coming from an election, so everything is ready and the joy is that the runoff is just between the All Progressive Congress, APC, and the Peoples Democratic Party, PDP.

“Due to the fact that there was no clear winner of the councillorship election. People should come out to vote and know that their security is guaranteed.”

Olasehinde urged both candidates to sign a Memorandum of Understanding, MoU, assuring the commission of a peaceful election come Saturday.

Responding, the PDP candidate for Ward F, Agege LG, Mr. Sakiru Akinwande said that he was on ground in all the 43 polling units to win the election.

Akinwande advised the commission to take the matter of security very seriously to prevent loss of lives.

“I am committed to peace and we have never defaulted in any peace agreement we signed before in history.

“We have always comported ourselves with our supporters. We are the party people want. People want us, and we are in a victorious mood,” he said.

On his part, the APC candidate, Mr. Yusuf Abolore who commended LASIEC for the stakeholders’ meeting, said that the forum would help engender peace at the poll.

“We should not take politics as a do-or-die affair. The PDP candidate is my younger brother. It is just a game; we cannot hurt each other.

“Elections will come and go, our family bond and community will still remain. We are one and we will still continue to be one,” he added.

It would be recalled that the last local government election in Agege, ward F was tied between PDP and the APC and LASIEC is empowered by its constitution to conduct a rerun election.