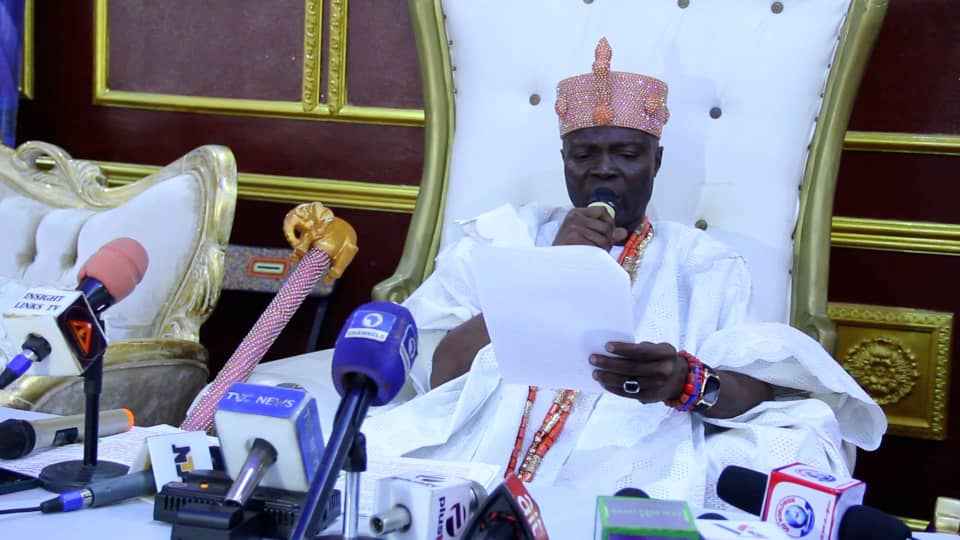 The report of alleged discovery of some money, Rolex watches, exotic cars and other items at the residence of the Former Chief of Army Staff, Lt Gen Tukur Buratai has once again be described as “fake news and campaign of calumny by the fifth columnists.”

The Olowu of Kuta, Oba Hammed Adekunle Makama, Tegbosun 111, said this on Tuesday when he addressed newsmen at his Palace in Kuta.

The traditional ruler described the linkage of the items found at a residence that belongs to a military contractor, Mr Kabiru Salahu to General Buratai as an attempt by some faceless groups to tarnish the image of the the Nigeria’s Ambassador to Benin Republic,

Olowu, who was flanked by some other traditional rulers said Buratai remains a personality with an impeccable character, worthy of emulation.

The Frontline Yoruba monarch said he’s ready to support any Nigerian that’s patriotic and have shown enough commitment to the unity of Nigeria like Buratai.

In his address tagged, “ We Can Vouch For The Integrity of Buratai”, Olowu commended the ICPC for the “timely rebuttal that thwarted the shenanigans of those who want to ridicule Buratai simply because of politics.

“It was the timely intervention of the ICPC that the money was found with the military contractor and not Buratai’s residence that saved the day, otherwise some would have believed the hatchet job by the online portal.
“For instance, if you found money meant for contract from one of Julius Berger’s directors, does it mean the money belong to President Muhammadu Buhari who gave them contract? The monarch questioned.

“Buratai has no house in Wuse 2 where all the items recovered by the ICPC were found. It’s purely an attempt by politicians to tarnish his image. Not many people were comfortable with his presence at the Eagle Square recently during the All Progressives Congress Primary in Abuja.

“He has also been named as part of the APC campaign council for Osun State governorship election in July. I think you can see where the attack is coming from.”

“I wish to acknowledge Ambassador Buratai as a man of steel, and always a great soldier, who has continued to show leadership, and approaches each day with a desire for excellence. When he served as the Army Chief of Staff, Ambassador Buratai developed a virtually demoralized and ill-equipped army that he met, providing the type of enduring leadership that is so very visible today. It is only right to give some honour to whom honour is due.

“It is, therefore, considered the most unpatriotic act for anyone to keep insulting this gentleman whose antecedents, even as a diplomat, have continued to stand him out as an honest, transparent, and patriotic Nigerian.

“In conclusion, let me state that those trying to pull him down will have so many of us to contend with, hence they are advised to desist from media terrorism against Buratai.”