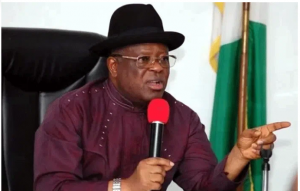 Governor Dave Umahi of Ebonyi has said that only the best and popular candidates would emerge in the forthcoming All Progressives Congress (APC) congresses in the state.

Umahi gave the assurance in Abakaliki on Monday while addressing party stakeholders during APC meeting in the state ahead of the party’s congresses in the state.

According to him, only the best and popular choice of the people will emerge either through consensus arrangement or election.

The governor warned against imposition of candidates on the basis of loyalty to leaders, noting that the party would be bound to have more problems during elections if leaders imposed candidates on members.

Umahi said that peace and unity of the party were paramount and enjoined leaders to guide against factors that would lead to factions in the party.

“If we impose people that are not popular because they are loyal to us, then, we will have more problems during elections.

“This is why our party emphasises on consensus. But, this consensus must be tested in the field.

“This is so because if you say that somebody is the most popular and acceptable by the people, he should be able to prove it, and I think that the will of the people should supersede our own will if we want to win elections.

Consensus does not mean that we should stay in Abakaliki and write those who will represent the rural people; this is not consensus.

“So, we will like to have a transparent congress, we will like the local people to have their say and when we do this, there will be peace and we will go into the elections more united,” Umahi said.

The governor appealed to members of the party to see themselves as one big family, irrespective of the time of joining the party.

He said there was no such thing as ‘foundation’ member of APC, adding that both the old and new members of the party should be seen and treated as equal party members.

“I have been working very hard to unite those who came newly from the Peoples Democratic Party (PDP) to the APC and those who were APC ahead of this, but let me emphasise that there is no such thing as foundational APC members.

“We will never put a knife between the old APC and those who joined from PDP, we will not do that because we cannot go into the election with that.

“Let me say that nobody here or about 99.9 per cent that was not in one party or another before, so we are all joining APC at different times and so there is nothing like foundational APC members or foundational PDP members,” the governor added.

He added that the party had mechanisms that aggrieved members could explore to ventilate grievances and urged party faithful who would have any issues from the congresses to follow laid down rules and not petition the national Headquarters.