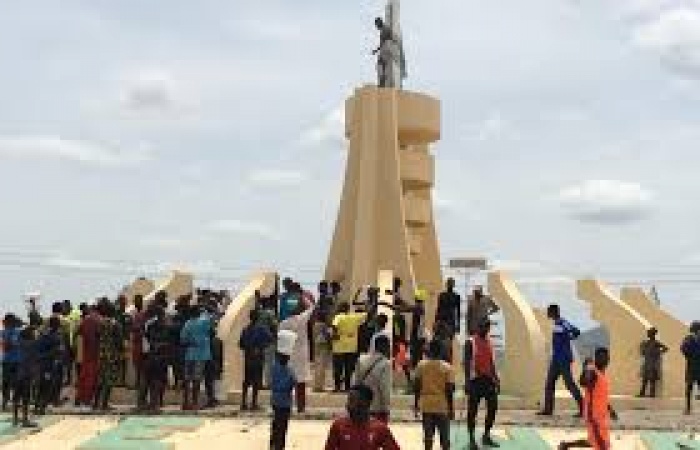 The Nigeria Army and Police in Taraba State have engaged in battle of words over the attempted suicide of a soldier. The police have said they have no hands in the episode that led to a soldier attempting to commit suicide, while the army accused police of brutalizing the soldier.

A soldier, whose name was given as Ali, had climbed the Welcome to Taraba Roadblock Tower – over 24ft high, and threatened to jump down and die if the Army men do not come to his rescue.

Speaking in Hausa and pidgin, he was saying: “I want to die, if soldiers do not come to my rescue. Allow me to jump down and die.” But the youth who gathered at the place begged him: “Please do not jump. We don’t want you to die.”

For over an hour, residents of Jalingo struggled to save him from committing suicide.

But police spokesman, David Misal, asked: “If the police had actually brutalized the military man, where did he get the strength to climb the high tower? Why didn’t he report officially?

“If the police manhandled a soldier and he got injured, was he supposed to go into the streets and be threatening to kill himself?” Misal asked.

Ali was seen on the high altitude Tower, attempting severally to jump down, but the people tried to make sure they saved him if he would jump. But they said they preferred he changed his mind and did not jump.

Witnesses said the soldier’s behaviour attracted their attention when they spotted him on top of the tower pulling and throwing down the items of clothing on him.

“We noticed someone climbing the tower and pulling off his clothes. We got there to discover he was someone we know. He was left with underpants and an inner vest and poised to jump. We went close and began to beg him,” an eyewitness said.

A close look revealed he had an injury on his left kneecap, which he bandaged.

A source told The Nation that Ali, fond of riding military motorbikes in town, has mental illness and the army are contemplating relieving him of his job.

After several hours, dozens of soldiers arrived at Roadblock and asked him to come down. He did and was taken in the military truck they brought.

It was gathered the soldiers later confronted the police, accusing them of slapping their colleague. But the police denied the allegation.

Another high-ranking soldier said the army were investigating the incident to find out whether Ali is mentally ill. (The Nation)