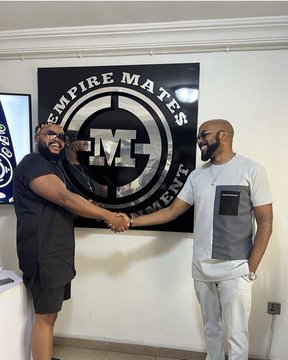 Whitemoney joins the likes of Mike, Ebuka Obi-Uchendu, Adesua Etomi-Wellington, DJ Xclusive, Toolz and others managed by the agency.

Aside from being signed, Whitemoney will also drop two singles ‘Egwu’ and ‘You Bad’ on Friday, September 23.

Whitemoney shared a photo of himself with Banky W while they were signing a record label agreement via his Instagram account on Tuesday.

He later moved the record label down to Lagos in 2008 where he signed music stars like Wizkid, Niyola, Shaydee, and Skales.

Producers like Masterkraft, Jaysleek, Cobhams Asuquo have also been linked to his record label.

In 2018, Banky announced that E.M.E was dissolved as a record label and is now a talent management company that is focused on creative marketing, advertising, PR, and brand events.