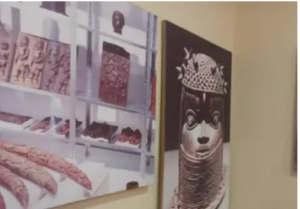 WITH controversy surrounding the final destination of looted aretfacts expected to be returned to the country from some European countries topping the public space recently, the Edo State government, yesterday, said it would continue to engage the palace of the Oba of Benin to secure the final return of the artworks.

The Edo State government has said there was no conflict of interest between it and the Oba of Benin over the artefacts, adding that the seeming negative perception was unfortunate.

A statement by the Secretary to State Government, SSG, Edo State, Osarodion Ogie, said: “The publicity being given the issues creates a wrong impression of conflict between the government and the Oba of Benin, His Majesty, Oba Ewuare II.

“The Edo State government and the governor have always acted transparently and in consonance with existing federal and state laws in all matters relating to the proposed return of the artefacts and monuments.

“The actions of the state government thus far on this issue have been driven by selfless, patriotic considerations and in the best interest of Edo State and Edo people.

“Governor Godwin Obaseki has displayed and will continue to display immense respect for our traditional institutions and, therefore, will continue to make effort to secure a private audience with His Royal Majesty to discuss his concerns.

“The governor has, consequently, ordered that on no account should anyone, whether in government or acting independently, engage in disrespectful exchanges and/or altercation with our revered Royal Majesty and the Benin Royal Palace.

“Governor Obaseki, meanwhile, expresses his gratitude to President Muhammadu Buhari, Minister of Information and Culture, Alhaji Lai Mohammed and other officials of the Federal Government for their patriotic and tireless efforts that have brought us to the verge of this eagerly anticipated achievement which has remained elusive for a century.

“While thanking and congratulating the Federal Government, the president, the minister, the Royal Palace of the Oba of Benin and all stakeholders, who have contributed to the successes so far recorded in this endeavour, the governor assures that he will continue to work assiduously with all local and international stakeholders for the eventual and final return of these valued records of our great and glorious heritage back to Benin City for the benefit of all Edo people, Nigerians and the black race.”

Meanwhile, a social activist, Benjamin Oyemwense, has joined the support that the looted artefacts expected to be returned to the country should be kept in the custody of the Oba of Benin.

He called on Obaseki to have sincere dialogue with the Benin monarch with a view to reaching mutual understanding on the best way the artefacts would be of utmost benefit to the royal palace and the Edo people.

Oyemwense said the recent statement by Oba Ewuare II to discerning minds, revealed that some opportunists with parochial interest were trying to bring the state governor and the Oba, on a collision course over the artefacts.

He, therefore, advised that Obaseki should be wary of such persons. The activist said the governor should endeavour to clear the controversy surrounding issues of the Benin Royal Museum and the Edo Museum of African Arts, EMOWAA, in his interface with the Benin monarch.

He warned government officials not to join issues with the Oba on the development.