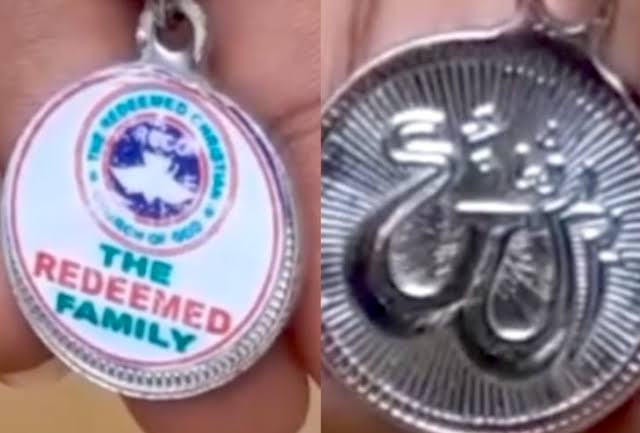 The discovery, lately, surrounding the Redeemed Christian Church of God, RCCG, and Islamic religious pendants, gone viral, is the direct consequence of the naivety or naivete of a certain business acumen. But beyond the sloth, avarice or greed in business, there’s zealotry, prejudice, dogmatically dispensing foul feelings of fanatical intolerance, and to be mild, parti pris, tendentious bias, the characteristics of hypocritical bigots.

While this is not negotiating a mano on the appropriatness or otherwise of the pendant, religious bigots, zealots and propagandists or bugs are unfortunately, a bitter ender, decked, more often than not, in affective indoctrination, stimulating hypocrisy, subtle prejudice and unfair hostility with preferment to dogmatic brain process, perception and thought. The stance regrettably would take the religiously bigoted away from the investigative standpoint initiative at how the religious pendants turned to a web of religious harassment and discrimination with capacity to cause escalation of cross misunderstanding in the nation polity, already heated up by the now everywhere aggressions, victimizations, physical attacks and exterminations. Holocaust as corollary, with many nationals and non- nationals, still countlessly counting, being killed, maimed or wounded and kidnapped accompanied by widespread disruption of socio- economic activities.

The disputatious pendant with neck chain which has Islamic contents engraved like from madrasah and gone on internet flight, a Friday ago, findings have revealed, were made as souvenir, memento mori, memorabilia or keepsake and put on counters for sales at Islamic mega events recently by a shrewd business outfit. But the outfit in foxy business rebranded the unsold pendants with the Pastor Enoch Adejare Adeboye RCCG sticker letters, images and logos embossed artlessly on the inscribed Arabic writings and mosque on the leftover pendants, the unsold and had them widely re- sold to the Christian faithful at the last RCCG annual convention that marked the church 70th jubilee in Lagos.

The business outfit’s objective, messy, was to make sloven, untidy money and offset debts from the earlier unsold stock of the pendants, the clever by half acuity or canniness of the business outfit consumerism, but one hugger-mugger mistake, nasty, obscene, despicable, cruddy or grubby, gone viral, ratty that generated needlessly rounds of religious suspicion in the nation socio-political firmament for the opposition elements or bigots to feed on. In Nigeria, bigoted, hypocritical elements abound in religion and politics, Midas touching intolerance to those that differ in views, opinions or perceptions. That’s the root cause of fallen morals, values and the instrumental- idealistic – stupid evil in the differential treatment meted to employees in offices and other secular, non- secular places of work as offshoot of differences in religions. Whereas, religion should be individual identity for social connections across beliefs and practices

More than politics, the diversity of contrasting religious issues in contemporary Nigeria have made religion the Fifth Estate of the Realm, closely following the Press, the Fourth Estate after the Executive, Legislature and Judiciary. Like the press, the old watchdog, religion, of late, has assumed, with huge sensibility and unfettered freedom, the responsibility of watching over the nation’s government and politics, and reports to the governed, the _de facto_ adherents of religions. The Fifth Estate ought to know, and it should know that it does damage to itself if it distorts and colours reality in its enlightenment programmes on such toxic issues as antagonisms, incitements, confiscations, indoctrinations, fanaticisms, discriminations, harassments, persecutions or victimizations, delusions and crimes as byproducts of religious bigotry, intolerance or prejudice.

Nigeria, in the worldview is not the most or least religious, not the only nation that respects all religions, not a nation that has no religion freedom, and not a nation, religion free. The admixed RCCG-Arabic pendant catches my fancy, and me, writing on the pendant even presently from my bed after road accident, church bound, Sunday, June 12, albeit now on convalescence, is because every human being is either religious or spiritual; and more importantly, the pendant cannot put the nation on hold as it cannot hold water. The mosque on the pendant is a house of God, and _Allahu Akbir_ the Arabic line on the pendant’s other side means, _God is the greatest_ the shared attribute of God across religions, which impresses that the pendant virus must stop from going further viral to permit peaceful atmosphere for the change of baton to the Tinubu presidency, come the 2023 general elections.

Christians, particularly, the Adeboye RCCG flocks have nothing to fear over the pendant; Muslims, the North east, North west faithful are friends, not foes; and Muslims, Christians in the South have no contentious issues to make the Muslim-Muslim presidential ticket a hot- button. The ticket is a necessity of the time for power shift to the South. Analytically, there’s no credible alternative to Asiwaju Bola Hammed Tinubu in the race to the nation’s presidency. All votes must be for him. Every vote counts.

*OLUSESI writes at the Foot of Most Merciful. Most Gracious. All-knowing. He can be reached via isaacolusesi@gmail.com