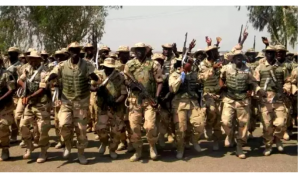 **As Totsl of 300 Boko Haram experts surrender in one week.

**How Sustained Ground & Air Bombardments is Flushing-Out Terrorists from Enclaves.

There are indications that the days of Boko Haram/ISWAP terrorists who had held sway for about ten years are coming to an end following the surrender of about 300 terrorists and some of their Commanders in the North East.

This is just as Amir Abu Darda (terrorist Commander) in charge of IED’s, Improvised Explosive Device making for the group has equally surrendered and carried along with him, 20 IED experts, with weapons and other incendiaries.

Many of the terrorists according to findings are said to be coming out from the Sambisa Forest and the Lake Chad axis following a no holds barred and relentless unleashing of land bombardments by the Nigerian Army with artillery and infantry firepower while the Nigerian Airforce is dropping sorties with precision and leveling their hideouts in caves and enclaves.

At the same time, Nigerian Navy gunboats and platforms deployed at the Lake Chad, supported by Airforce jets are smoking out the terrorist’s bases in the Tumbus and tributaries through which they carry out occasional attacks on communities in Borno and Yobe states

While this is ongoing, the military is simultaneously intensifying its non kinetic operations and giving communities which had been traumatized for years that with their support through valuable information and cooperation, the criminal elements will be quickly smoked out.

A senior military source told Vanguard that aside the impact of the fire-power from troops, “Our kinetic and non kinetic lines of operations are paying off. That is why about 300 BHT surrendered. Moreover, those that have surrendered are treated within the ambit of international best practices.

“We believe that the feedback of how those who surrendered are treated is getting back. The role of intelligence is massive but as you know, intelligence successes are not visibly seen when inserted but the outcomes are currently manifesting.

“This unfolding mixed technique and humane handling of surrendered members are tangible steps towards ultimate success. The media also has been key to shaping and boosting troops resolve to continue their aggressive posture.

The senior source urged the media and citizens to continue to maintain their confidence on the military efforts and condition the insurgents towards accepting defeat as we progress.

In keeping to international best practices, the source pointed out that within the last one month, over 150 insurgents who renounced their criminal involvement in the warped belief of the group were released to government.

It would be recalled that Vanguard reported that some notorious bandits’ led by Kingpin Dan Maraki & Associates were also planning to surrender but were shopping for prominent citizens to help them approach the authorities to appeal for amnesty.

The bandits involved are said to be those terrorizing states in the North West of the country, particularly Katsina, Niger and Kaduna states

A top security source had stated that two of the most wanted and notorious bandit leaders, ‘Samaila’ and his Associate ‘Dan Maraki’ have been orchestrating the plan for the possible appeal for the amnesty, to enable them surrender.

“In fact, the signal we are getting is that these two bandits’ commanders are seeking a way to surrender with their gang members and if all goes well for them and government keeps its promise, other bandit groups in Zamfara and other parts of the North West would come out and toe the same line”.

It was learnt that the underground moves by the bandit leaders which intelligence agencies intercepted is fueled by the current sustained combined military onslaught by troops of operation Hadarin Daji comprising the Army and Airforce, on the bandits camps scattered around the many forests in Kaduna, Katsina and Niger states.

The security source added that “the intended plan by the bandit leaders (Samaila and Dan Maraki) to surrender with their gangs and plea for amnesty if accepted and handled by the federal government, could signal an end to banditry, collaboration of their cohorts while boosting the morale of troops.”

The heat from the troops on ground offensive is further enhanced by the rapid and highly impactful non-kinetic line of the operation which is giving affected communities confidence and belief in the army to cooperate against the criminal elements.

“The Chief of Army Staff, Lt. General Farouk Yahaya during his visits to troops in the battle areas in the forests, spent time with the troops and assured them of all the necessary support with regard to the onslaughts against the bandits, no matter who they are or where they come from”, a source said.

It was gathered that in the past, some bandits leaders gave their gang members the impression that they were untouchables based on who they know in the society which is responsible for the ‘lack of political will’ to really go after them (bandits) and bring the menace of the criminal gangs to an end.

However, the Chief of Army Staff, is said to have put his foot down and told his troops to ignore any such belief, ‘if it ever existed’, directing troops to smoke out the bandits and assuring them that it is in line with the express resolve to clear out the criminal elements.