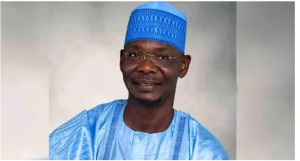 Governor Abdullahi Sule of Nasarawa state says President Muhammadu Buhari has approved the establishment of the Agricultural Machinery and Equipment Development Institute in the state.

He stated this in Lafia on Saturday at the opening ceremony of the Lafia City Mall, a subsidiary of Wave Mart Group of Companies.

Sule said the institute would be located in Lafia as a step forward in terms of industrializing the state.

He added that it also indicated the readiness of the state to maximize the diverse opportunities in the agriculture sector especially agriculture mechanization.

“We are ready here in Lafia. Lafia is attracting a lot in the area of agriculture industrialization. I am very happy.

“In fact I woke up this morning extremely happy because last night I receive the approval from Mr President for the setting up of the Agricultural Machinery and Equipment Development Institute right here in Lafia.

“I want to use this opportunity to extend my greatest appreciation to President Muhammadu Buhari. Just few weeks ago, we realized that there are going to be about three or four institutes that are about to be established.

“I now wrote for the establishment of the institute in the state and just yesterday, Mr President approved it and we are going to establish that institute right here in lafia,” he said.

Sule added that aside the institute, the state government had also recently signed an agreement with Gurku-Kabusu community in Karu local government area of the state for the commencement of an industrial zone on a 13,000 hectares of land in the area.

He explained that the choice of the area was due to its close proximity to the Federal Capital Territory (FCT) Abuja, which thereby offers huge market potential to the investor in the zone.

He said that it also made the business initiative beneficial to the state, the industrialists and the host community.

“Today, we concluded by signing with the people. Gurku-Kabusu is just five kilometres from Maitama. With that type of opportunity that we have, that will be mutually beneficial to the state, the community and the industrialists, we are ready now for industrialization in that area,” he said.

The governor also revealed that in line with his policy to engage youths in skills acquisition, an institute for skill acquisition has been completed with equipments being procured for the various skill offices in the center.

He then thanked Wave Mart Group of Companies for setting up the mall, adding that other investors who indicate interest to invest in the state would have no regrets.

“Any investor that is interested, that is coming to Nasarawa state, there is no better time to come than now,” he said.

In his opening address, Mr Emmanuel Umoru, Chairman of Wave Mart Group of Companies, said the Lafia City Mall was not the first but the third investment of the group in the state.

“This is a state we have invested for almost about seven years now and to the glory of God, we have no reason to regret. On this note, i make bold to say that we shall come again. We appreciate your drive for investment in the state,” he said.

In a goodwill message, Emir of Lafia, Rtd Justice Sidi Bage appreciated the private sector drive of the governor and also lauded the Wave Mart Group of Companies for choosing Lafia to locate their investment.

In an interview after the event, Umoru said the Lafia City Mall which so far has gulped about N678 million would employ more than a hundred staff with most of the staff been indigenes of the state.

“The reason for establishing this kind of facility is not just for making money but to give employment to our teeming youths,” he said.