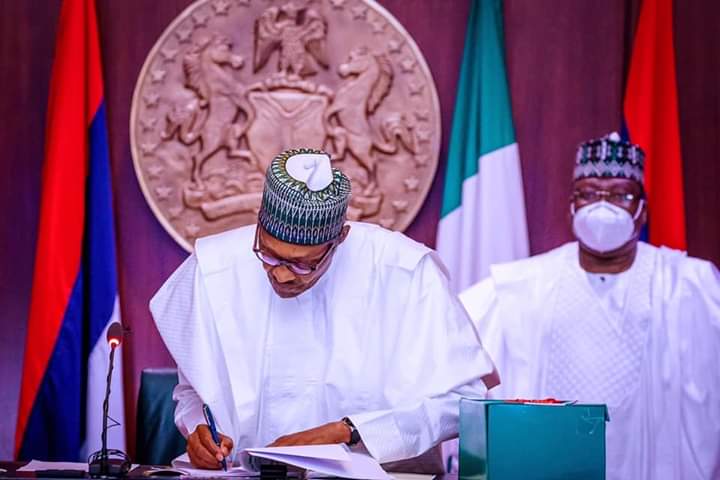 The President Muhammadu Buhari (retd.), has expressed reservations on the ‘‘worrisome changes’’ made by the National Assembly to the 2022 Executive Budget proposal.

He expressed concern on Friday in Abuja while signing into law the 2022 Appropriation Bill and the 2021 Finance Bill, describing the changes as “worrisome”.

He noted that he would revert to the National Assembly with a request for amendment as soon as the Assembly resumes to ensure that critical ongoing projects cardinal to this administration do not suffer a setback due to reduced funding.

Some of the worrisome changes highlighted by Buhari are as follows:

1- Increase in projected FGN Independent Revenue by N400 billion, the justification for which is yet to be provided to the Executive;

4 – An increase of N21.72 billion in the Overhead budgets of some MDAs, while the sum of N1.96 billion was cut from the provision for some MDAs without apparent justification

5- Increase in the provision for Capital spending (excluding Capital share in Statutory Transfer) by a net amount of N575.63 billion, from N4.89 trillion to N5.47 trillion

6 – Reductions in provisions for some critical projects, including N12.6 billion in the Ministry of Transport’s budget for the ongoing Rail Modernisation projects

7 – Reduction of N25.8 billion from Power Sector Reform Programme under the Ministry of Finance, Budget and National Planning

8 – Reduction of N14.5 billion from several projects of the Ministry of Agriculture, and introducing over 1,500 new projects into the budgets of this Ministry and its agencies

10 – Changes to the original Executive proposal in the form of new insertions, outright removals, reductions, and/or increases in the amounts allocated to projects

11 – Provisions made for as many as 10,733 projects were reduced while 6,576 new projects were introduced into the budget by the National Assembly

12 – Reduction in the provisions for many strategic capital projects to introduce ‘Empowerment’ projects.

13 – Insertion of projects that are basically the responsibilities of State and Local Governments, and do not appear to have been properly conceptualised, designed, and cost.

14 – Many more projects added to the budgets of some MDAs with no consideration for the institutional capacity to execute the additional projects and/or for the incremental recurrent expenditure that may be required.

15 – Despite the National Assembly increasing projected revenue by N609.27 billion, the additional Executive request of N186.53 billion for critical expenditure items could not be accommodated without increasing the deficit, while the sum of N550.59 billion from the projected incremental revenues was allocated at the discretion of National Assembly. (PUNCH)