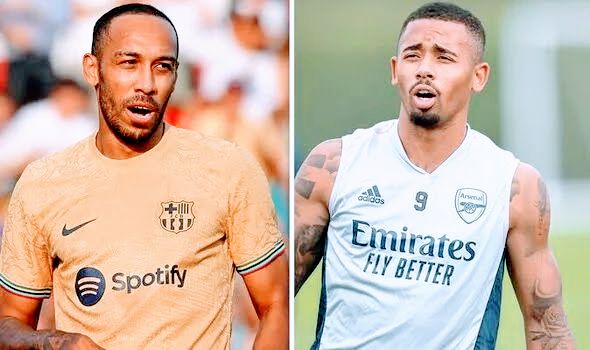 Pierre-Emerick Aubameyang would be the perfect striker for Chelsea, according to Darren Bent. The ex-England and Tottenham forward says Aubameyang’s proven record puts him ahead of new Arsenal star Gabriel Jesus.

Chelsea are in the market for a striker following the departure of Romelu Lukaku to Inter Milan on loan. Timo Werner could also be on his way out of Stamford Bridge before the window shuts at the end of this month.

Aubameyang has been linked with a move to the Blues from Barcelona, just over six months after leaving Arsenal for the Nou Camp. The former Gabon international left the Emirates in acrimonious circumstances after being stripped of the captaincy.

But the arrival of Robert Lewandowski could reduce his game time at Barca. Bent believes the 33-year-old would make an immediate impact if he joined Chelsea.

The pundit said on talkSPORT: “[Aubameyang] would be a good addition to the squad. One thing we know about Aubameyang is that when he goes to a new football club he hits the ground running.

“At Barcelona he’s got 11 goals in 17 league appearances. At Arsenal he got ten in his first 14 appearances. Incredible.

“He is someone who knows where the back of the net is. His goalscoring records are fantastic.

“Chelsea need someone who’s going to stick the ball in the back of the net, that was supposed to be Romelu Lukaku last season… Mason Mount was Chelsea’s top scorer with 11, then [Kai] Havertz with eight, then Lukaku with eight. They need to find someone who can be a main source of goals and I think Aubameyang when he gets to a new club – he’s fresh, he’s excited, he’s hungry, he will get you the goals.”

Arsenal signed Jesus earlier this summer as a replacement for the departed Aubameyang and Alexandre Lacazette. Bent believes he is a better option for Arsenal now than their former skipper.

However, he says Aubameyang has proven he can play as a central striker in the Premier League for a whole campaign, something Jesus has not yet done. Bent added: “It went wrong at Arsenal for Aubameyang so you’d say Jesus [is better for the Gunners] as he’s fresh and hungry.

“I said earlier that Aubameyang’s proven. Jesus is proven but we don’t know if he can do it down the middle consistently in the Premier League for a full season. We’ve seen Aubameyang do that.

“I think where Arsenal are at right now I’d prefer Gabriel Jesus. But I think Chelsea, who really need a No 9 and someone who could stick the ball in the back of the net, he’d probably be perfect for them.”