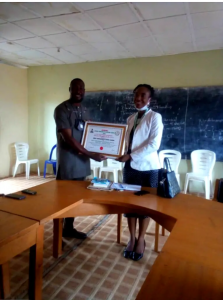 Christ Ambassadors’ College has been awarded the best performing school in Kaduna State. The Award was presented by NAPS (National Association of Polytechnic Students) as part of the Associations Annual Leadership event.

The President of NAPS, Mr Adekanbi Sunday Asuku while presenting the award in the school’s premises, said “over the years our association has noticed with keen interest that students from Christ Ambassadors’ College are usually outstanding in the various higher institutions they find themselves. And this may not be unrelated to the school’s zero tolerance to exam malpractice amongst other excellent cultures.”

In her message while receiving the award, the School Manager, Dr (Mrs) Tosin Akinpeloye, expressed her appreciation for the award from the reputable Association. She further stated that “This award is an affirmation of Christ Ambassadors’ commitment to excellence and integrity in the educational sector in Nigeria”.

Christ Ambassadors’ College, today, is even more determined and poised in their pursuit and commitment to produce graduates who are sociable, innovative, confident and technically empowered to achieve success through hard work, integrity, creativity and persistence.