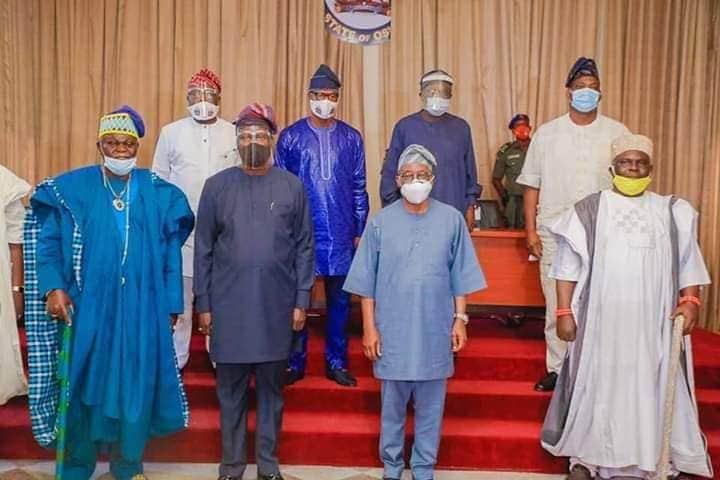 Governor, State of Osun, Adegboyega Oyetola, said on Thursday that government would not tolerate any act capable of threatening peace and security of lives and property of the people of the State.

He stated this during a peace meeting with the traditional rulers and leaders of Ifon and Ilobu communities, held at the Government House in Osogbo.

The meeting had in attendance monarchs of the two communities, Olufon of Ifon, Oba Al-Maroof Adekunle Magbagbeola, and the Olobu of Ilobu, Oba Ashiru Olatoye Olaniyan.

It was gathered that crisis is gradually brewing between the two communities over land settlement located within the area, as the duo are laying claims to the land.

But in a swift response towards preventing possible violence that might result from the dispute, Governor Oyetola held the meeting to broker peace and restore unity between the two contending towns.

The Governor urged the two parties to maintain the peace, adding that the law would take its due course on anybody or party found to be engaging in any act capable of breaking law and order in any part of the State.

The meeting resolved that the two communities should stay off the disputed land until the matter is amicably resolved.

It was further resolved that all the farmers from Ilobu that are farming on Ifon land and vice versa should be allowed to go back to such farming lands without let or hindrance and without molestation.

The Governor implored the traditional rulers to talk to their subjects and ensure that peace continues to reign in the land.

“Osun has been the most peaceful State in Nigeria and we must maintain that record by ensuring that we allow peace to prevail by loving one another. Love has no boundary.

“Your subjects willl watch out for your body languages. Therefore, you must watch your utterances. We will settle land dispute. But we cannot bring back any life that is lost in the process. So, we must do everything to maintain peace, ” Oyetola added.

In their separate remarks, the two monarchs, who signed peace accord, assured the State government of their readiness to be law abiding citizens.

They pledged to continue to promote peace and prevail on their respective subjects to eschew violence.

In the meantime, the people of Ilobu have reacted to the allegations leveled against them by the Publicity Secretary of Ifon-Orolu Progressive Union, Jide Akinyooye.

According to a statement by the Publicity Secretary of Ilobu-Asake Development Union, Kazeem Alabi, Ilobu sons have refused to be dragged to any war by their rivals, adding that the people of the town have continued to tow path of peace since the inception of the crisis.

“That in our previous statements, conversations and dialogues, we have stated it emphatically that we’re for peace and nothing would make us do anything contrary, even in the face of provocations.

“No Ilobu indigene goes to both the disputed area and the area where the unfortunate incident happened late yesterday/earlier today. This is because we’re waiting for the Governor of the state, Mr Gboyega Oyetola to intervene and we believe in his leadership.

“Ilobu people use this medium to call on the police and other security agents to unmask the perpetrators of the said unfortunate incident and bring them to book.

“We want to say that no Ilobu son or daughter was involved in the criminal act that was recorded today. Ifon people should check themselves as many of their utterances before yesterday are calls for violence. We hold strongly that the incident was a result of their bellicosity.

“The claims by Akinyooye is another symptom of buccal diarrhea that he’s suffering from and we as people, are not ready to engage him in any way.

“While we sympathise with those that lost their loves ones, we call on our brothers and sisters to emulate the peaceful conduct and disposition that Ilobu people have shown and sheath their swords as war will never solve any crisis.”