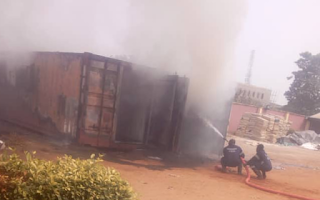 A container conveying card readers deployed by the Independent National Electoral Commission in Anambra state has been gutted by fire on Tuesday.

The incident happened at around 14:30 hours on Tuesday.

Officials of the INEC reportedly fled the scene as the inferno boomeranged.

No official of the commission was ready to speak with the press when contacted but the content of the container was confirmed.