Controversy has continued to trail the indefinite suspension of a teacher at Masifa Community Grammar School in Ejigbo local government area of Osun State, Mr Philip Akinyemi, by the State Government over alleged breach of Civil Service Rule.

Many social media commentators in Osun have taken to their Facebook walls and WhatsApp to express mixed reaction over the development.

Akinyemi, who was queried earlier in December over his social media posts and comments, received his suspension letter on December 20, 2021.

According to Akinyemi, he is a Physics teacher at the school and has earlier replied the query sent to by the Osun West Education District Office, Ikire.

His suspension letter signed by E. O. Onatola partly reads, “I am directed to inform you that as a result of your actions of professional misconduct and abuse of Office, your actions created public assault to the authority concerned.
Abuse of power as a teacher. Disobedience to your School Principal and in particular to the State Government of Osun.

“The Ministry of Education/Osun West Education District Office came up with the following decisions;
It is a fact that you Mr. AKINYEMI PHILIP a teacher of Masifa Community Grammar, Ejigbo. You are more focused on partisan politics than your duty as a teacher and commitment to the State Government as a Civil Servant in Osun State. Your unpatriotic behavior, abusive and provocative postings and comments on social media are against the Civil Service rule. Unless contacted beforehand, you are not permitted to enter the school premises.”

The Issues
Our correspondent understands that Akinyemi is a staunch member of the ruling All Progressives Congress and was one of the witnesses at the Tribunal in 2019 during the legal tussle between the incumbent Governor Gboyega Oyetola and candidate of the People’s Democratic Party, Ademola Adeleke.

“I joined teaching service in 2013. I applied and I scored 175 during the exam. The cut-off was 150 for Physics, so I was employed.” Akinyemi told InsightMedia.

“I have been a politician since 1999. I was a member of the Alliance for Democracy. When I joined service, I never stopped my political participation.” When asked the faction of APC he belongs, Akinyemi said, “I belong to TOP because I’m a supporter of Hon. Najeem Salaam.”

Analysis of his Facebook account shows that he has been so vocal in the promotion of TOP as shown few below.

Article four reads:
(1) The civil servant shall approve decisions and take actions in an impartial, non-discriminatory and equal manner, without giving priority to some persons or groups of persons based on race, nationality, ethnical origin, language, religion, gender, opinion, political affiliation, property or social origin.

(2) The civil servant is expected to be respectful, impartial, honest and courteous in his/her relations with the public, as well as in relations with his/her superiors, colleagues and subordinate staff.

(3) The civil servant shall not make natural or legal persons, including other civil servants, behave illegally, taking advantage of the official position he/she holds.

The Query and Akinyemi’s response

Documents made available to our correspondent revealed that Akinyemi was queried by the Tutor General on December 8, wherein he was asked to explain why disciplinary actions should not be taken against him.

The query reads, “Your postings and comments on social media for some time have been inciting and has shown that you have derailed from what you were employed to do as a teacher. You are more focused on partisan politics than your duty as a teacher and commitment to the State Government as a Civil Servant in Osun State.

“Your comments and postings have shown a great disrespect to state Government and the Governor that is committed to a regular payment of wages and salaries.

“Your unpatriotic behavior, abusive and provocative postings and comments are against the Civil Service rule. Therefore, you are to explain upon receipt of this query why disciplinary action(s) should not be taken against you.

“Your explanation should reach the office of the Tutor General/Permanent Secretary, Osun West Education District Office on or before 12 mid-day on Friday 10th December, 2021.

“Investigation shows that several people have warned you against such provocative and controversial postings, including your colleagues and Principal but you turned a deaf ear to their warnings.

“The office is fully aware of your fundamental human right and entitlement to your opinion on social media but it is wrong for you, in fact an act of betrayal to post provocative comments against the State Governor and his Government.”

Upon the receipt of the letter, Akinyemi replied the agency on December 9. He denied abusing Governor Gboyega Oyetola in any of his social media posts. He explained that he was one of those that witnessed in favour of the Governor during the Tribunal proceedings in Abuja.

His response reads, “I refer to the query directed to me on 8th December, 2021 on above subject matter. My Involvement on social media is never to disrespect the state Government and Mr. Governor.

“I was employed as a physics teacher presently at Masifa Community Grammar School, Masifa, where I always discharged my statutory obligations as expected, ranging from teaching of students as schedules on the time table and all statutory records are updated from time to time and well kept.

“I have never, and will never insult the personality of Mr. Governor and his Government. In fact, in January, 2019 during the court case between Mr. Governor and Senator Nurudeen Ademola Adeleke after the election at election petition tribunal, Abuja. I was one of 14 witnesses that were randomly selected across the state then. The duo of Hon. Oladejo Kazeem and my humble self were the last two witnesses who gave evidences in favour of Mr. Governor before the tribunal at federal High Court, Apo-Abuja. The said Hon. Oladejo Kazeem is the current chairman, Orolu LCDA. We were conveyed to Abuja then, during the said court case under the watch of; Chief Wole Olaonipekun (SAN), Barrister Kolapo Alimi and Barrister Waliu Salimon.

“Myself and Hon. Oladejo Kazeem witnessed in favour of Mr. Governor then.

“Despite my fundamental human right and entitlement to my opinion on social media, non of my postings and comments are neither abusive nor provocative against state Government and Mr. Governor,

“I am highly committed to what I am employed for as a physics teachers and I vow to discharge my best to promote sound education in the state.”

When our correspondent visited the Facebook account of Akinyemi (Philip Akinyemi) on Wednesday, it shows that he’s a loyalist of former Speaker of the Osun State House of Assembly, Najeem Salaam, as he said. Salaam is one of the arrowheads of the Osun Progressives, the splinter group within the Osun APC.

His Facebook post also shows that he’s been giving supports to the TOP group. Here are what our correspondent found on his account. However, most of his activities were in October 2021. 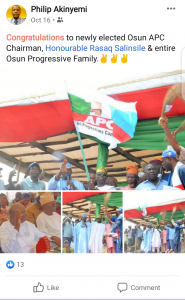 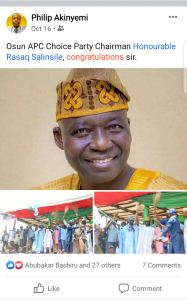 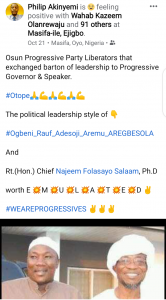 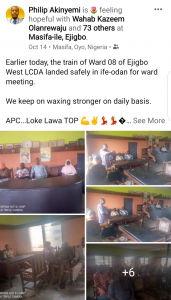 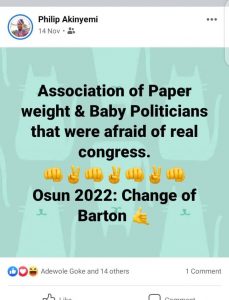 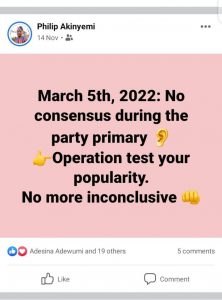 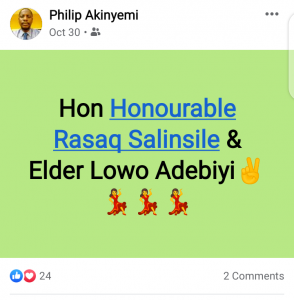