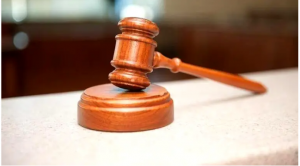 Chief Magistrate Mrs, B.O. Osunsanmi, sentenced him, after he pleaded guilty to stealing the chairs.

The convict, who’s residential address was not given, was arraigned on a two count charge of conspiracy and stealing preferred against him by the Police.

Earlier, the Prosecutor Supol Chinalu Uwadione, told the court that the defendant and others at large, conspired amongst themselves to commit the offence.

He said that Akindele, committed the offence on August 2, 2021, during working hours, at 42, Thomas Street, Lagos, Island.

According to the prosecutor, the offence committed is punishable under Sections 411 and 287, of the criminal laws of Lagos State 2015.

However, the defendant pleaded guilty to the offence against him.