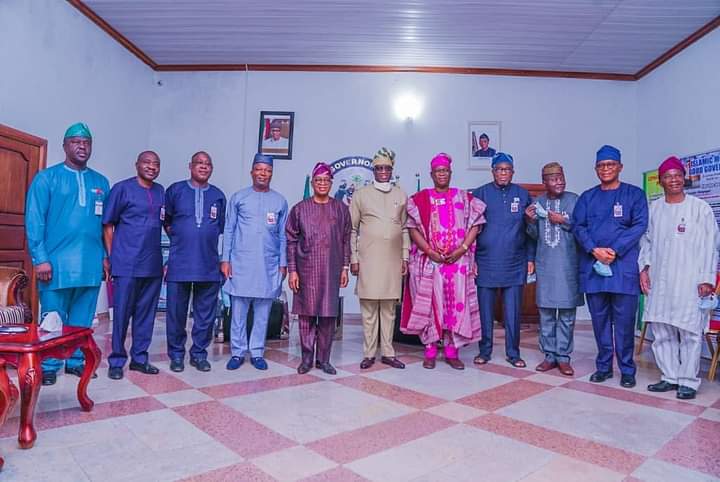 The indigenes of Ejigbo town, Ejigbo local government area of Osun State on Wednesday lauded the administration of Governor Adegboyega Oyetola for the prompt response it gave to fight COVID-19 in the town after some individuals imported it into the community.

The indigenes appreciated the governor for prioritising their security and welfare since assumption of office.

The indigenes of Ejigbo stated these during a courtesy visit to the governor by the leadership of Ejigbo Eagles Club, at the Government House, Osogbo.

Speaking on behalf of the members of the club and the entire indigenes of the town, the President of the club, Mr. Adebowale, lauded Governor Oyetola for taking the bull by the horns in ensuring the general welfare and wellbeing of the citizenry.

Adebowale who expressed gratitude to the governor on the myriad of supports given to the people of the town in the last one and half years, said the people of Ejigbo will forever be grateful to the government for its determination to develop the town.

He added: “We are here to thank you for the good works that you and your government have been doing to reposition the State and ensure the general welfare and wellbeing of the citizens.

“We have come here today to express our profound gratitude to you for redeeming our image and for rescuing our people who tested positive for COVID-19 shortly after their return from Ivory Coast.

“As indigenes of Ejigbo, this is a great thing to us. By this gesture, your government rescued us from negative impact which the occurrence would have brought to our people if not being proactively handled, curtailed and managed.

“We are equally aware of your prompt intervention to keep the branch of the State university located in Ejigbo running among other things.

“These to us are significant because it will go a long way to complement the wellbeing of our people and, by extension, contribute in no measure to the socioeconomic development of our land.

“As citizens and members of Ejigbo Eagles Club, we are ready to give your administration the utmost support throughout your tenure”.

In his remarks, the Governor of the state of Osun, Adegboyega Oyetola, thanked the leadership of the Club for complementing governnement’s efforts to make life meaningful for the citizens.

He said the administration took the challenge of 127 Ivory Coast returnees as part of efforts to rescue the State and the nation from the unforeseen calamity such might bring if not properly curtailed.

Oyetola who said the administration had invested hugely in every sector, particularly health, infrastructure and education, noted that the decision to take up the case of 127 Ivory coast returnees was to save the country from the exponential spread of the deadly virus.

He said: “We priorioritise the health of our people because we believe once that is done, prosperity is guaranteed. To us, health is given the best place; that is why we were able to manage the pandemic.