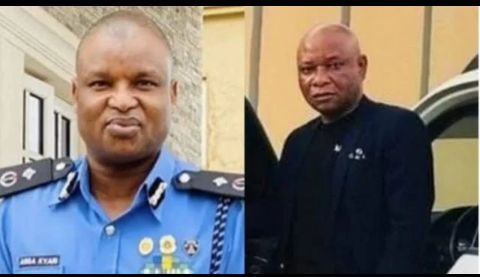 The Police Service Commission has announced the suspension of two police officers working under the suspended Deputy Commissioner of Police, Abba Kyari, in the Intelligence Response Team of the Force Investigation and Intelligence Department of the Nigeria Police Force.

The commission has also directed the Inspector-General of Police, Usman Baba, to ensure the arrest of an Assistant Superintendent of Police, John Umoru, who is currently at large.

The suspended police officers are Assistant Commissioner of Police, Sunday Ubua; and an Assistant Superintendent of Police, James Bawa.

The decision was based on their alleged involvement in a drug deal being investigated by the National Drug Law Enforcement Agency.

According to a statement on Thursday by the commission’s Head, Press and Public Relations, Ikechukwu Ani, their suspension will take effect from Monday.

Also, the IGP was requested to suspend Inspector Simon Agrigba and Inspector John Nuhu in accordance.

Ani said the commission’s pronouncements on the matter were conveyed to the IGP in a letter dated February 16 and signed by a commissioner, Justice Clara Ogunbiyi, on behalf of the chairman, Alhaji Musiliu Smith.

The statement read, “The Police Service Commission has suspended Assistant Commissioner of Police, Sunday Ubua, and Assistant Superintendent of Police, James Bawa, in accordance with the provisions of the Public Service Rules 030406.

“The commission has approved the suspension of the officers until the outcome of the investigation into the allegations levelled against them.

“The commission also directed the Inspector-General of Police to note also that DCP Abba Kyari, who prior to this allegation was on suspension, shall remain so until the conclusion of investigations.

“The Inspector-General of Police was requested to place on suspension Inspector Simon Agrigba and Inspector John Nuhu in accordance with the Powers of Delegation.

“The IGP is further requested to inform the commission of the arrest of ASP John Umoru who is currently at large whenever his arrest is effected to enable it to take necessary action.”

Ani added that the commission also directed the IGP to furnish it with information on further development on the matter for necessary action.

Meanwhile, a former Director-General of the NDLEA, Lanre Ipinmisho, on Thursday said nobody should be spared in the fight against drug trafficking.

While speaking on Sunrise Daily, a Channels Television programme, Ipinmisho said every offender should be treated the same way, no matter the social standing.

On Kyari’s case, Ipinmisho said he was happy that the police were cooperating.

He said, “I am happy with the consistency of the police because they took the matter seriously. To have carried out operations even while on suspension, Kyari took the police for granted.

“This is a classical case where we stand for our country and not police or agencies. The NDLEA Chairman has said if there is anyone involved in the case, it should be brought forward and the officer will be prosecuted.”