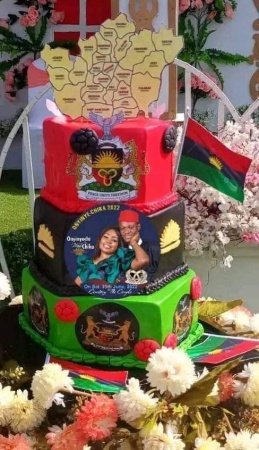 Mr Nwoba had last Saturday during his wedding unveiled a cake which was designed with Biafran insignia including the flag and coat of arms of the defunct republic.

The picture of the cake trended on social media at the weekend attracting widespread attention including that of the DSS in the state who invited him to appear at its headquarters on Tuesday.

Mr Nwoba while announcing the invitation said he has sympathy for Biafran agitation but was against violence of any kind being used by some of the agitators.

Nwoba, however, said that he did his wedding cake with Biafra insignia to show solidarity to the Biafra course.

According to him, every Igbo man no matter his political affiliation ought to embrace the struggle for Biafra.

He, however, said he was not in support of violent Biafra agitations.

“I actually did it to pass a message, that no matter our political inclinations, we still have the interest of Igbo nation at heart. It is to show my love and my commitment to ensuring that the gospel for the creation of a country of Igbo extraction comes to fruition.

“So, I’m a fan of Biafra agitation. That’s why I said, okay, in order to contribute to the Biafra struggle, I have to do my cake, giving it a Biafra colours. I’m not against Biafra agitation, but I’m against going about it violently. I did it just to show my concern,” he said.

Speaking on Wednesday, Mr Nwoba said the security agency has cleared him of any wrongdoing after asking him some questions.

He said he was asked to go on Tuesday and return on Wednesday after which he was told he was free.

“I went to their yesterday and responded to their questions after which I was asked to go and come back today. I went back today and they said I am free to go, that I have not done anything wrong. I just left their office some moments ago,” he said.

Mr Nwoba commended the DSS for the professional way they handled the matter stating that the officers who handled his matter were courteous and respectful towards him at all times. (The Nation)