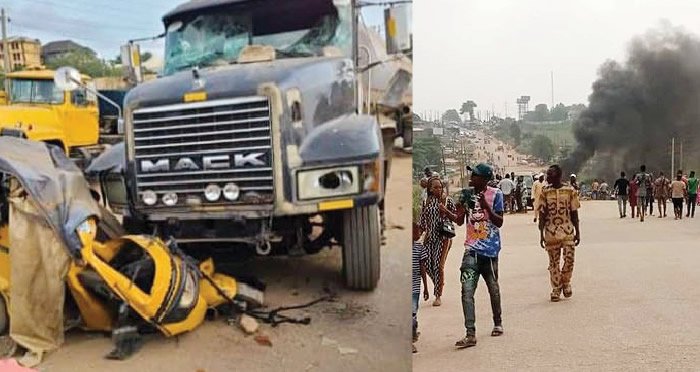 Eight persons have died when a trailer truck coming from the northern part of the country rammed into a stationary vehicle at Oko-Olowo area of Ilorin, the Kwara State capital.

It was gathered that the incident occurred at Oko-Olowo junction on Wednesday.

An eyewitness, Salaudeen Abiola, said the driver of the trailer with registration number DAT SGM396ZR, which was carrying cows, rammed into another trailer that was parked along the road.

He said a male victim believed to be the owner of the animals who sat with the driver in the front seat died on the spot.

“The other victims include people inside the stationary trailer and other traders and marketers around the place during the incident. It was a gory sight to behold,” he said.

Another eyewitness gave the casualty figure as 12. He said corpses of the victims have been deposited at the morgue of the General Hospital in Ilorin.

The sector commandant of the Federal Road Safety Corps (FRSC) in the state, Frederick Ogidan, confirmed the incident.

Ogidan said, “17 people were involved in the accident, but 8 died while 4 were injured.” (LEADERSHIP)