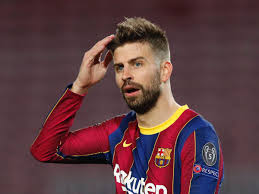 FC Barcelona coach Xavi Hernandez is not sure whether defender Gerard Piqué will be available for Thursday’s game against Eintracht Frankfurt in the Europa League quarter-finals.

He wants to be there and shows commitment. We will see if it is enough. If he’s not 100 per cent fit, he won’t play,” Xavi told a news conference on Wednesday.

Piqué played the first leg, but left the pitch early in the match due to an adductor injury and missed FC Barcelona’s league game against Levante at the weekend.

The defender, however, took part in the training session on Wednesday.
Hopefully he can play. It’s clear how important he is for us,” teammate Eric Garcia Said

Following the 1-1 draw in the first leg, Xavi sees his team under pressure.
We all know this club very well. It is the most demanding club. We have a duty to win and play well,” the coach said.

When asked, Xavi avoided making any comments about the rumours that Bayern Munich’s top goalscorer Robert Lewandowski is set for a move to FC Barcelona.

I understand the question, but this is not the time. It is time to focus on tomorrow’s (Thursday’s) game and not on transfers. He is a great player. I can’t say more about it,” Xavi stressed.