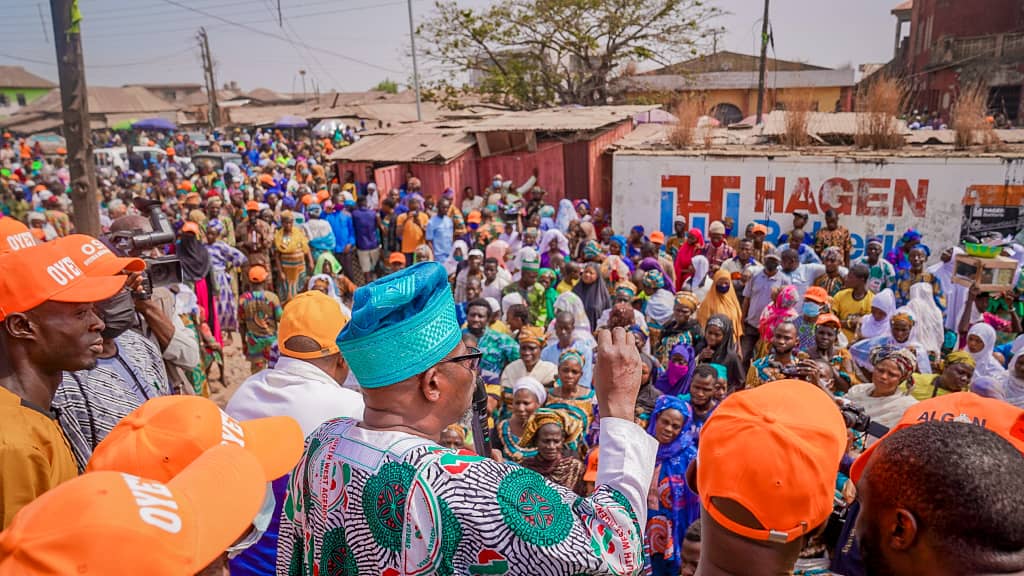 Members of the All Progressives Congress (APC) in Iwo Federal Constituency, comprising of Iwo, Ayedire and Ola Oluwa local government, on Thursday, reaffirms their commitment and support to the re-election of Governor Gboyega Oyetola for second term in office.

They made this known at a rally to show their support and solidarity with the governor.

Speaking at the event, the Special Adviser to Governor Oyetola on Political Matters, Alh. Gbadebo Badru noted that the most important thing to do for now is to ensure that Oyetola is re-elected.

“We have seen several things that Oyetola have done for us. I want to assure you that everything you have been told Oyetola will still do, he will do it.

“They have started again, they want to suffer us in Iwoland like they did in 2018, we won’t allow it to happen anymore.

“Alhaji Moshood Adeoti was Secretary to the State Government for eight years, Iwo-Osogbo road was completely abandoned, he was also the Chairman, Tenders board for eight year, overseeing all government contracts but he couldn’t do anything about our road.

“Adeoti did not resign or leave the party until he was denied governorship ticket, that is because of his selfish interest but we won’t allow him lead us astray in Iwoland it won’t happen anymore.

“Iwo Federal Constituency has decided, we are standing with Oyetola. Adeoti should go and calm down and not bring bad things to us in Iwoland.

“Let us all calm down, after Oyetola, then we can talk about West by the grace of God”, he said.

Also addressing the party faithful and supporters at the event, Dr. Amidu Tadese, Commissioner for Water Resources and Energy noted that Oyetola is the first Governor that loves Iwoland adding that members of The Osun Progressives were in government for eight years when the state was bouyant but did not play any major role in Iwoland.

He said, “the only road that Aregbesola claimed to have done in Iwo was done by Kamorudeen Alao’s LG administration.

“Oyetola has started works on Lawyer Atanda road, after that he will do Odoori to Adeeke and two other major roads.

“In the last 7 months, Oyetola has been sending us food monthly, apart from that, our water works was established in 1952, since then its has been abandoned. Now Oyetola has awarded the contract for its rehabilitation.

“Some people were there for 8 years, they couldn’t do anything, now they are back. We won’t allow them to spoil Iwoland, “ he added.