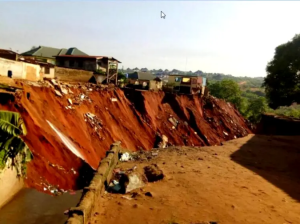 Many farmers in Oghalegbu village, Okija in Ihiala local government area of Anambra State have been trapped across the Ulasi River in the area as they could no longer access the upland following the cutoff of the only road leading to the community by gully erosion.

The farmers went to their farms and hoped to return later in the day only to observe that it had become impossible for them to return to their homes as the erosion had cut off the road.

The road was constructed during the administration of former Governor Peter Obi and it had been helping in the evacuation of food crops from the agricultural rich community.

However, due to the heavy rainfall in the past few days, vehicles from outside the community could no longer get to the point where the farmers usually display their crops for sale and the farmers whose crops were being expected in the market have been trapped across.

An indigene of the village, Mr. Charles Okonkwo -Uzor told Vanguard that all the people who went to their farms, weekend, have not come back as the erosion has cut off the only road to the river.

According to him, all the farmers who were across the river have remained incommunicado, thereby creating anxiety among their family members.

READ ALSO: One dead, 10 missing as hotel collapses in China

He said: “Our people were happy when this road was built by Governor Obi as it made it easy for the farmers to evacuate their produce. Outsiders were also coming to the village to buy, thereby improving the economy of the people.

“With the farming season getting to its peak, many farmers have been looking forward to a bumper harvest and the likely resultant economic empowerment, but their hopes may be dashed by this sudden cut off of the area by gully erosion.

“This community is one of the food baskets of Anambra State and the state government should do everything humanly possible to combat the erosion so that food crops can easily be evacuated to other parts of the state.”

He said although the trapped farmers might not be facing so much difficulties where they are in their farms, those they left at home have been worried because of their absence.

He called on the Anambra State government to intervene immediately by controlling the erosion so that normal life could return to the community.