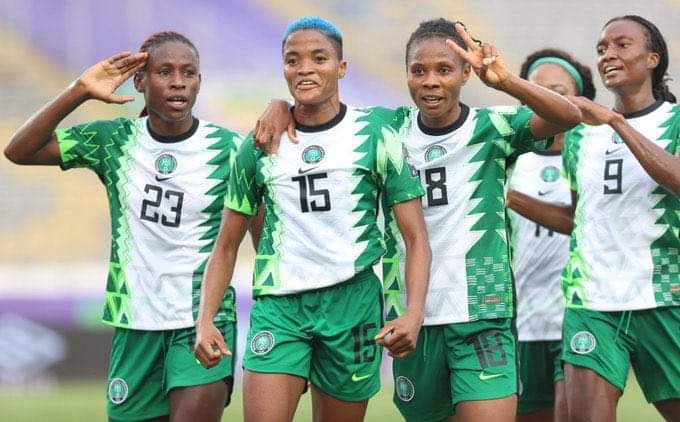 The Falcons proved why they are super on the African continent that even after being reduced to nine, they fought and found a way to take host Morocco to penalties before losing 5-4 in the second semi-final of the CAF Women’s Nations Cup on Monday night at the Stade Prince Moulay Abdallah in Rabat.

A red cards to Halimatu Ayinde two minutes into the second half and another in the 70th minute to Rasheedat Ajibade changed the momentum of the game.

Despite being a player down, the Super Falcons took the lead through Uchenna Kanu in the 62nd minute but the Lionesses hit back four minutes later through Mssoudy Sanaa before triumphing on penalties after extra time.

Nigeria’s Super Falcons came into Monday’s semi-final against Morocco’s Atlas Lionesses with the pedigree of multiple WAFCON champions as Coach Randy Waldrum decided on starting Uchenna Kanu in place of Francisca Ordega but it was the home team that started the better of the two teams.

Morocco kicked off and won the first free-kick after a minute when Zineb Redouani was tripped just before entering the Nigerian box. The ensuing free kick was headed over by Ghizlane Chebbak. That was the way the first five minutes went as the home team was roared on by the 45,000-strong crowd.

Morocco won the first corner kick in the eighth minute but Falcons goalkeeper Chiamaka Nnadozie got a good hand to clear the danger. The Falcons fought back and had a glimpse through a ball into Ifeoma Onumonu but her touch let her down.

The Falcons took charge of the midfield through Ngozi Okobi, Halimatu Ayinde, and the battling Christy Ucheibe and pushed Morocco back but the last ball was not good enough to produce any goal in the first half.

The second half started with Morocco handed an advantage as Ayinde was shown a red card for a stamp on the Achilles of Rosella Ayane after a VAR review. Ohale cleared on the line in the 52nd minute as the Morocco players poured forward.

The Falcons then went ahead in the 62nd minute after a good cross down the right flank from Ajibade was headed against the post by Onumonu. The rebound was pounced on by Kanu as the ball went off Yasmine Mirabet for the opening goal.

The Moroccans were only behind for four minutes. Ayane’s cross was spilled by Chiamaka Nnadozie into the path of an onrushing Mssoudy Sanaa to get the equaliser. Four minutes later, Ajibade received a red card for a stamp after another VAR review.

Down to nine, the Falcons retreated into a defensive shell as the Moroccans poured forward in search of a winner. Despite a lot of the ball and the trickery of Fatima Tagnaout down the left flank, the Lionesses found the Falcons a tough nut to crack.

Captain Onome Ebi went down with a hamstring injury in the 77th minute and was replaced by Michelle Alozie with Ashleigh Plumptre moved into the centre of defence to pair the magnificent Osinachi Ohale.

The match went into extra time and the Falcons goalkeeper Nnadozie stood tall to handle all the shots.

After 120 minutes, penalties ensued and the Moroccans were perfect while Onumonu missed the Falcons’ second kick to hand Morocco a first-ever WAFCON final ticket. They will battle South Africa in the final while the Falcons lick their wounds as they prepare for the third place match against Zambia.