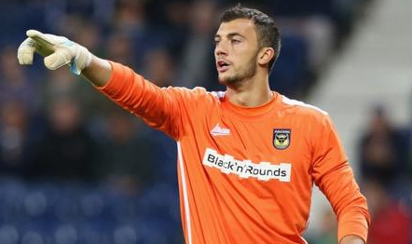 It was like a drama on Sunday when Salford city goalkeeper, Max Crocombe was sent off for urinating on the pitch during his team 2:1 win at Bradford Park Avenue, the club have said.

In a tweet, Bradford Park Avenue announced: “We can confirm that Crocombe has been sent off for urinating during the game. We are not joking.” Bradford PA club secretary Colin Barker said. Press Association Sport: “That’s correct. He was told by the steward twice not to do it and he went ahead and had a pee. “He went to the side of the stand as I understand it. I didn’t actually see it but the referee definitely sent him off for it because he was alerted to it by his linesman. “One of our spectators has made a formal complaint so we’re waiting to see what will happen from there. But there’s no secret about it. It’s been reported to the police.”.