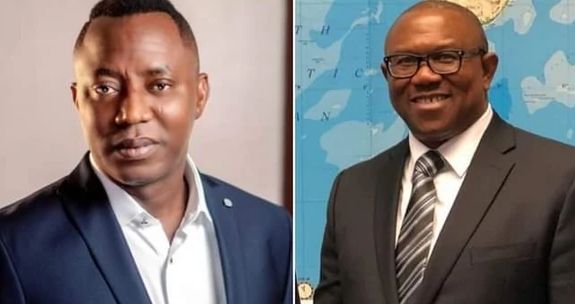 The presidential candidate of the African Action Congress (AAC) for the 2023 elections, Omoyele Sowore, has dared his Labour Party counterpart, Peter Obi, to step out for a television debate with him.

Sowore also challenged his counterparts in the All Progressives Congress (APC) and Peoples Democratic Party (PDP), Bola Tinubu and Atiku Abubakar respectively to a debate to discuss ideas on how to redeem the glory of the country.

However, the AAC aspirant said he was convinced Obi as well as Atiku and Tinubu would not show up at a debate with him if they were invited.

He made this known while speaking on a Channels Television programme, ‘Politics Today,’ on Wednesday, November 23, 2022.

“Bring me and Obi to discuss our ideas on your show, I guarantee that he would not come,” Sowore told the show’s anchor.

The ACC presidential aspirant also urged the media to push candidates with ideas, alleging that some candidates tagged as “frontliners” have been deliberately granted more media access.

Sowore’s word: “In my course of doing media recently…the little media attention we got, I found some very fantastic presidential candidates who have better ideas than the people you (the media) keep pushing in front of the public.

“The media needs to stop doing that; you need to put people who have great ideas of how to make the country work in front of the people. Let them keep repeating these ideas until everybody is hearing them, and not people who don’t talk or when they talk, you can’t even hear them, or are not audible enough or not clear enough, and you say they’re front liners. How can they be front liners when they don’t have frontline ideas?”