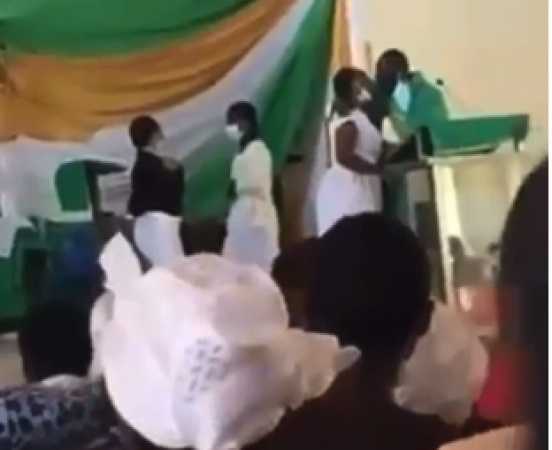 An Anglican priest, Rev. Fr Baltharzar Obeng Larbi  whose video of him kissing some female students of the St Monica’s College of Education in Mampong in the Ashanti Region, has been suspended as the chaplain of the college.

Larbi was on Wednesday directed by management of the college to step aside to facilitate investigations into the matter by the Anglican Church of Ghana.

The Principal of the College, Rev. Fr. Dr Okyere Korankye, revealed on Wednesday that it would good for the chaplain to step aside to allow thorough investigation into the matter.

The principal said, “He has been asked to step aside and also hand over all relevant documents in his care to the principal of the college.”

He was seen standing by a podium while the three students walked up to him in turns, where he kissed them on their lips.

Wearing a full cassock, the Anglican priest was also seen urging the students to come to him and remove their face masks.

He then kissed them, amid shouts and jubilation from other students in what appeared to be an auditorium.

The video showed the chaplain urging the third student who seemed unwilling to partake in the act to remove her face mask and receive the kiss.

The student complied reluctantly and also got a share of the kiss, which many have since described as “a holy kiss”.

The incident is said to have occurred last Sunday during a ceremony where Rev. Fr Larbi was awarding some deserving students.

The matter is currently being investigated by the Anglican Church of Ghana under the leadership of the Metropolitan Archbishop of Ghana, Most Rev. Dr Cyril Kobina Ben-Smith.

In a statement released yesterday and signed by the Executive Director to the Metropolitan Archbishop of Ghana, Venerable Dr George Dawson-Ahmoah, the church said it was saddened by the development and would fully investigate the incident.

“The church is saddened by the news and wish to state expressly that thorough investigation has immediately been instituted into the matter and the action of the said priest would be dealt with in accordance with the norms and values of the Anglican Communion where morality is extremely revered in the church,” the statement said.

The Anglican Church further added that it had initiated efforts to help the students with counselling sessions to help them “avert any psychological issues that may arise from the video.”

The General Secretary of the Christian Council of Ghana (CCG), Rev. Dr Cyril G. K. Fayose, backed the investigations by the Anglican Church.

Speaking in his personal capacity, he said it was important that an investigation was conducted into the ‘kissing incident’ which he described as strange, especially during COVID-19 pandemic.

“My point is that we don’t have enough information. The background is necessary. You can’t begin to condemn just for the sake of condemnation when you don’t know the full story,” he said.

Rev. Fayose took the opportunity to remind priests in the various institutions to be of good example for others to follow.

The video, said to have been shot by someone in the audience has generated various comments on social media.

While some condemned the incident as unacceptable, and one that did not befit the status of a Rev. Father, others have jumped to Rev. Fr Obeng’s defence, describing it as a ‘holy kiss’ which they said appeared five times in the Bible in the books of Romans, Corinthians and others, saying “Greet one another with a holy kiss” (Romans 16:16, 2 Corinthians 13:12). (Adapted from Graphic Online, Ghana).