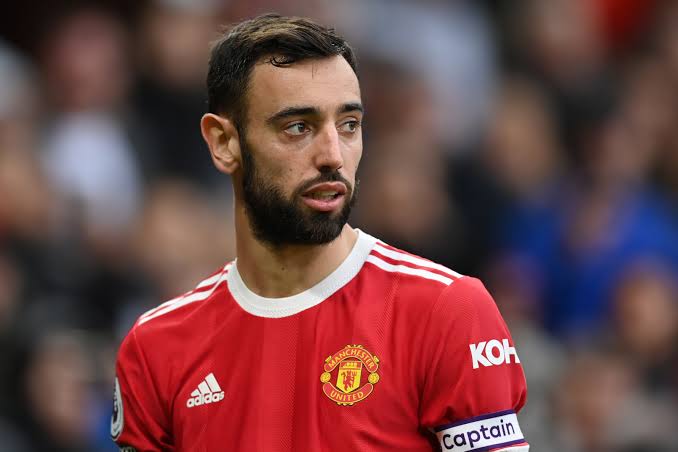 Manchester United’s downfall can be illustrated by many symbols but the demise of Bruno Fernandes might just be the most significant of all.

When the 27-year-old Portugal playmaker arrived from Sporting Lisbon in January 2020 in a deal that could rise to £67.7m, Fernandes looked a bargain as his Old Trafford career started in a blizzard of creativity and goals.

He was regarded as exactly the type of player required at the ‘Theatre Of Dreams’ if United were to move closer to Liverpool, Manchester City and Chelsea.

This has resembled a forlorn hope in recent times as Fernandes has gone into a dramatic decline in form and influence that has been summed up by his contribution, or lack of, in two damaging defeats at Liverpool and Arsenal this week.

In the 4-0 loss at Anfield, and it should be stressed he was far from alone here, Fernandes was a powerless, embarrassed bystander as rampant Liverpool over-ran United, while at Arsenal he produced the sort of performance that has been his unflattering trademark in recent months.

Once a driving force, he has been reduced to a niggling presence who appears more intent on debating decisions with officials and trying to win cheap fouls than making meaningful interventions in matches.

The situation is all the more frustrating because he has shown previously he has considerable natural ability – and his input would make Manchester United a much better team.

He made two key contributions at Arsenal, but neither of them were positive.

Fernandes, United’s captain in the absence of the dropped Harry Maguire, surprisingly took on penalty duty in front of countryman Cristiano Ronaldo after Nuno Tavares handled under pressure.

It was the game’s pinch point, with Arsenal hanging on desperately at 2-1 and with the threat from Ralf Rangnick’s side growing ominously.

Having taken responsibility – Rangnick said afterwards Ronaldo “didn’t feel as if he should take it” – Fernandes went into one of those puzzling ‘Riverdance’ jigs and a few quicksteps before rolling his penalty against the outside of the post.

His misery was compounded by Arsenal goalkeeper Aaron Ramsdale’s overt celebration.

Whether it was frustration at another defeat or his missed penalty, the Portuguese was then also guilty of a late challenge on Tavares that could easily have brought him a red card.

Fernandes played a part, a bad one, in Granit Xhaka’s crucial third goal that confirmed Arsenal’s win and when he was removed for Juan Mata with six minutes left he was the very picture of a player being put of out his, and Manchester United’s, misery. It almost counted as an act of mercy by Rangnick. He was that poor.

The only good news for Fernandes in recent weeks was his signature on a one-year contract extension taking him through to 2026. The timing was slightly puzzling as it was done just before the confirmation of Erik ten Hag as United’s new manager and with no obvious reason tie him down quickly or with a queue of clubs seeking to lure him away.

Bare statistics illustrate Fernandes’ diminishing returns and the lack of product from what United hoped would be a dream team of creativity with Ronaldo.

Fernandes and Ronaldo have played in the same team 33 times for United but only combined for three goals. Fernandes assisted Ronaldo against Young Boys in September, Spurs in October and Atalanta in November. There have been no Ronaldo assists for his compatriot.

In his first season at United, from when he signed in January, he made 22 appearances and managed 12 goals and eight assists in all competitions. Last season he made 58 appearances with 28 goals, including 13 penalties and 18 assists.

This term, he has made 42 appearances with only nine goals and 13 assists – after starting with an opening-weekend hat-trick in the 5-1 win against Leeds United.

With a long-term contract secured, it must be assumed he is regarded as a key component of Ten Hag’s long-term plan, so the Dutch coach must find a way of Fernandes returning to be the orchestrator and goalscorer of his early days at Old Trafford, rather than the peripheral, argumentative figure he has become.

If he can do that, and Fernandes has shown what he can do at his best, then this will be a quick win for Ten Hag. And from what we have seen from United in recent weeks, the man at the helm will need as many of those as he can get.

Ronaldo, on the scoresheet again at Emirates Stadium, is portrayed by some as a “problem” for United (and therefore Ten Hag) because of his status and ego, but plenty of clubs would love a goalscoring problem like him.

Fernandes, on the other hand, has become a genuine issue as he looks a shadow of the player that illuminated United and provided so much excitement when he came to the club.

It will be Ten Hag’s task to press the right buttons and get Fernandes going again because he has not come up to anything like his reputation for some time as both his and United’s seasons have become mired in mediocrity. (BBC)