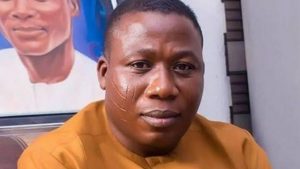 Giving update on the Igboho’s case in a Cotonou court, the Communications Manager for Ilana Omo Oodua, Maxwell Adeleye, disclosed that security operatives in Benin Republic have removed leg chain and hand-cuff from the Yoruba activist.

Adeleye said: “We are pleased to inform all Yoruba People and well-wishers that the Security Operatives in Benin Republic have removed leg chain and hand-cuff from Chief Ighoho since Saturday evening

“We reiterate that Chief Ighoho is not under any immigration-related probe in Benin Republic.

“Chief Adeyemo will appear in court this morning in Benin Republic to face the likely extradition charges to be brought against him by the Nigerian Government.

“We urge supporters from Nigeria not to bother coming to the court premises in Bénin.

Kindly stay in Nigeria and support with prayers and whatever you can do within the ambit of the law. We are confident that Chief Igboho shall be set free.”