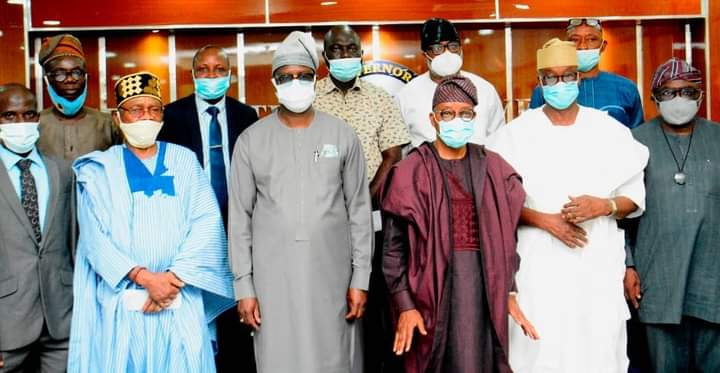 Oyetola said the inauguration of the Committee is part of the Administration’s efforts towards lifting the state out of economic misery and also ensure effective management of the State resources.

The governor added that appointment and inauguration of the Committee are in line with the Nigeria Minerals and Mining Act 2007, which empowers the Committee to oversee the regulation of the entire mining operations in the State and to discuss and advise the Minister of Solid Minerals on matters affecting encroachment, trespass, security, social unrest, pollution and environmental degradation of any land on which any mineral is being extracted as it relates to all licence holders within the State.

The nine -member Committee has Prince Omolade Binuyo as its head.

Recall that barely a year of coming into office, Governor Oyetola instituted the Osun Economic and Investment Summit and thereafter set up the Osun Investment and Promotion Agency, OSIPA, as veritable arms of the administration’s Development Agenda aimed at serving as a template for turning the fortune of the State around.

Speaking during the inauguration ceremony held at the Office of the Governor, Oyetola said the initiative was a clear indication that the Administration was committed to erecting a solid structure for driving resource-blessed economy, delivering resource boom and avoiding resource curse.

The Governor further noted that the Committee was inaugurated as a step towards sanitising the State’s resource climate and resolving the extant challenges being faced on the mining sites and the affected communities.

READ ALSO: Iloko-Ijesa: Now that the chains of repression and subjection are broken, by Lawal Sodiq

Oyetola who lamented the excruciating challenge of environmental degradation arising from palpable illegal mining activities in the State, said the decision to set up the Committee was necessary to curb the menace.

He called on the members of the Committee to live up to their responsibilities of redefining the sector for the betterment of the State and the citizenry.

“While we recognise that the exploration and exploitation of solid minerals are on the Exclusive Legislative list of the Federal Government, we must also note that we have been faced with the excruciating challenge of environmental degradation arising from lack of environmental and ecological literacy on the part of the local communities coupled with irresponsible and unprofessional mining by both licensed and illegal miners.

“The starting point for remediating this situation is for you to educate and sensitise the people on ecological literacy through town hall and media interventions.

“In achieving these tasks and ultimately setting Osun on the path of effective resource management, we have assembled men and women of character, relevant skills and experience.

“Without any doubt whatsoever, the tasks before you as members of this Committee are onerous and sensitive as they are related to the security and welfare of Osun people, which the 1999 Constitution says are the primary purpose of Government.

“As the eyes and the ears of government, I charge you to carry out your responsibilities, which are a call to duty, with the highest sense of purpose, responsibility and efficiency.

“I implore you as experienced professionals and elders, to employ peace management, conflict resolution and diplomatic skills and competencies to manage the thorny issues arising from mineral exploitation.

“You must sustain the standard set by our Administration during the town hall meetings with miners and community people to maintain peaceful coexistence.

“I hereby call on this Committee to rise to the occasion. The time to rein in the defaulters and ensure this ugly trend is reversed is now. I would also like to take the opportunity to call on the Federal Environmental Agencies such as NESREA to live up to their duties of enforcing environmental standards and compliance in the mining sector.

“The people of Osun look up to the members of this Committee to transform their challenges to fortune and to put their State on the map as the first State to get resource management right in the nation and on the continent,” he added.

Earlier in his remarks, the Deputy Chief of Staff to the Governor, Prince Abdulah Binuyo, said the Committee was set up to actualise government’s vision to reposition the mining and environmental sector.

The Deputy Chief of Staff who described the step as a round peg in a round hole, noted that the move would further help to complement government’s efforts at regulating and maintaining standard in the sector.

According to him, the Committee would help to improve and enforce compliance, thus setting Osun on the path of standard environment management and sustainability. 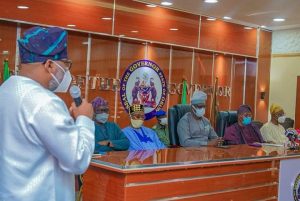 Speaking on behalf of other members, the Chairman of the newly inaugurated Committee, Prince Omolade Binuyo thanked Mr. Governor for giving him and his members the opportunity to serve the State in that capacity.

The Chairman, who expressed displeasure at the adverse effect of illegal mining activities with attendant environment degradation in the State, pledged the Committee’s avowed commitment to change the narrative to smooth, productive and harmonious relationship.

He said, “We are also determined to transform the sector for the betterment of the State and the nation.

”We pledge to uphold Omoluabi ethos and seek support and cooperation of ministries, relevant agencies and departments in the discharge of our duties,” he added.