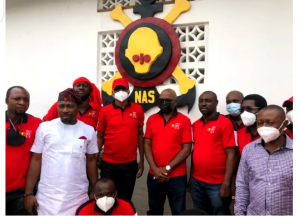 The leadership of the National Association of Seadogs, NAS, Pyrate Confraternity, have called on President Mohammadu Buhari not to be partisan as it concerns dealing with issues of insecurity in the country.

Speaking with Vanguard at the weekend in Akpabuyo, shortly after Frigate 10th Anniversary and Feast of Barracuda lecture with the theme :” Securing the Security in Challenging Time in Nigeria:Role of the citizenry,National President ,NAS,Mr Abiola Owoaje said no ethnic group or under any guise should be treated with levity at all, or as superior to others ,adding that we are all equal in the entity called Nigeria .

Owoaje said that the president or the president must not be seen to be partisan in any way especially as it concerns insecurity as all forms of threat must be matched with the same force as those in all other regions .

His words: “Governnent needs to listen more to the people ,a lot of the agitation you see today was born out of perceived neglect by the people hence the agitation from IPOB ,Yoruba Nation and the one that died down in the south-south is gradually rearing it’s ugly head again.

“So the governnent needs to be more sympathetic towards the plight of the people and to ensure that when people who are behind these atrocities ( Insecurity) are apprehended ,they are firm in dealing with them squarely and equally too .

“The Presidency itself sometimes is looking as if it is partisan whereas it should not be ,it is supposed to be a Presidency for everybody and should not be seen as being in favour of a particular section of the country or seen peaching one section against another .

When you make unsympathetic statement and you say they either take it or leave it doesn’t take us forward .It is time for Nigerians to wake up , because when it comes to election it’s like our brains go to sleep and we forget so easily the people who have kept us down.

“We as an association will continue to be the voice of the voiceless ,we shall continue to advocate for good governance and preaches against the ills in our society by always speaking truth to power no matter whose ox is gored,” he said .

On his part, Area Coordinator NAS ,Cross River,Engr. Solomon Olorunfemi said no threat should be treated with kids gloves as every threat has the potential to cause the unimaginable if not nipped in the bud at once .

“We need a dialogue to resolve our differences , the issue of arrest ,invasion is not what we need ,if the leaders are doing well ,followers will have confidence in following them .Chief Awolowo foresaw this and advocated for the massive education of the north ,if his prayers were implemented ,we might not be here now .

” All the agitation is because many regions in the country don’t feel a sense of belonging , everyone needs to be carried along , a lot of people feel that those leading us are the ones dragging us back and that why there are so many agitations .

” How can you declare IPOB a terrorist Organization ,declare another wanted ,yet you cannot declare killer herdsmen terrorists and there is so much kidnapping/ abduction of children,students and more going on on a daily basis, people are being killed everyday ,many killed in their sleep,it is heartbreaking , a drastic problem requires drastic solution .

“Our people have been pushed to the wall for so long now , Federal Governnent should not treat issues concerning our security with kids gloves anymore ,we must be resolute and deal with this monster called Insecurity now ,evil is evil,it has no colour,no ethnic nationality ,” he said.