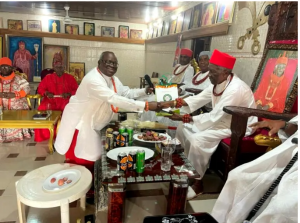 CHAIRMAN of the Nigeria Social Insurance Trust Fund Management Board, NSITF, Prince Austin Enajemo-Isire, has said the dark days and days of negative stories about funds were now in the past with the recent repositioning of the new Managers, both at the executive and Board level as recently inaugurated by the Federal Government.

He urged Business Community Leaders, Corporate business owners and other stakeholders in Asaba and Warri, Delta State to enrol their staff for the Social insurance cover provided by the fund in line with the provisions of the Employees Compensation Act 2010.

Enajemo-Isire, who led a delegation of top management Executives to the Business Community interactive session for Warri and Asaba region, which took place at the Jakesville57 River Beach and Farm Resort at Olomu, Ughelli South Local Government Area, Delta State, appealed to them to the Employees Compensation Scheme, ECS.

Saying that NSITF has been repositioned with the newly inaugurated Executives and reinvigorated Management Board, he said the new team was poised to deliver on the mandate of the fund.

Reiterating that the newly inaugurated Executives and Board by the Minister of Labour and Employment, Senator Chris Ngige, he said; “this Business interactive session is in line with the recently approved work plans to change the narratives with a view to realizing the vision and mission set by the Federal Government.

“Furthermore, these actions by the new team were meant to positively project NSITF to business communities and critical stakeholders for better appraisal of its activities, functions, strategic relevance as well as to develop radical business frontiers to enhance acceptance and participation to the attainment of the targeted goals”.

Enajemo-Isire explained the scope of the ECS Scheme and the opportunities it provides regarding social security/insurance cover for all organizations, emphasizing the need for organizing business operators and corporate executives having staff strength ranging from three and above to key into the Employees Compensation Scheme to enjoy the benefits.

Enajemo-Isire who is a financial expert and insurance guru of over 32 years in the risk management industry, spoke about the origin of NSITF which began with its establishment in 1961 as Nigerian Provident Fund, NPF, until 1993 when a new law was enacted that transformed it into NSITF.

He said; “the benefits of getting enrol in a social insurance scheme such as this cannot be over-emphasised”, stressing that “the scheme is set out to provide social protection that guarantees fair and adequate compensation to any staff who suffer occupational hazard while in active service of a registered employer or organization”.

Enajemo-Isire who led other top management staff of NSITF on a courtesy visit to the Council of Urhobo Traditional Rulers at the palace of their Chairman, HRM Richard Layeguen Ogbon, Ogoni Oghoro I, the Ohworode of the Olomu Kingdom in Ogoni-Olomu, appealed to the traditional rulers to encourage their subjects who are into businesses to register their organizations and enrol their staff in the social insurance protection cover provided by the fund.

The NSITF boss who also visited the Warri office of the board, charged the staff to purge themselves of all old habits, which, according to him, had done the Fund no good.

He said: “For us to effect the desire changes and realize the objectives of the institution, going forward we must first shelve all old habits and position ourselves to effect all necessary positive changes as a panacea to the growth and development of the fund”.