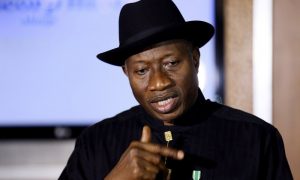 Warri: Former President Goodluck Jonathan has hailed Omoba Tsola Emiko, the Olu Designate of Warri kingdom, praying that he sustain the rich legacy of the throne of Olu of Warri.

A letter addressed to Omoba Emiko and personally signed by Dr Jonathan who was President of the Federal republic of Nigeria between 2010 to 2015 said the kingdom has a rich , colourful history and has lasted for hundreds of years.

Continuing, he prayed for long life for the Omoba as Olu of Warri, adding that his reign will be fruitful, taking the kingdom to greater height.

The letter dated 23 July, 2021 and addressed to the Olu of Warri Designate , Prince Tsola Emiko , ahead of the Coronation with the title : Congratulatory Message “, reads in parts

” I congratulate you on your coronation as the Olu of Warri. Your ascension to the throne of your forefathers comes at a time when our nation is in need of vibrant and transformational leadership owing to the different challenges we are facing as a people”.

” It is my hope that you will use the opportunity provided by this divinely ordained appointment to contribute your quota to the assignment of national development.”

“The Itsekiri Kingdom is renowned for rich and colorful history, one that has lasted for hundreds of years. The royal stool to which you have been found worthy is a national treasure, an emblem of patriotism, that has produced notable leaders in our country. As President, I met your father during his reign as the Olu of Warri and I am confident that your family background places you in good stead to serve your people with dignity and diligence.”

“Leadership is sometimes a difficult cocktail of hard choices and personal sacrifice: I pray the good Lord provides you with the wisdom and courage to defend the rich legacy that comes with the responsibility of being the Olu of Warri Kingdom.”

“May your reign be long and fruitful and may it signal a new era of great prosperity for your people.”

Omoba Emiko, the Olu Designate will be coronated as the 21st Olu of Warri, on August 21 this year.