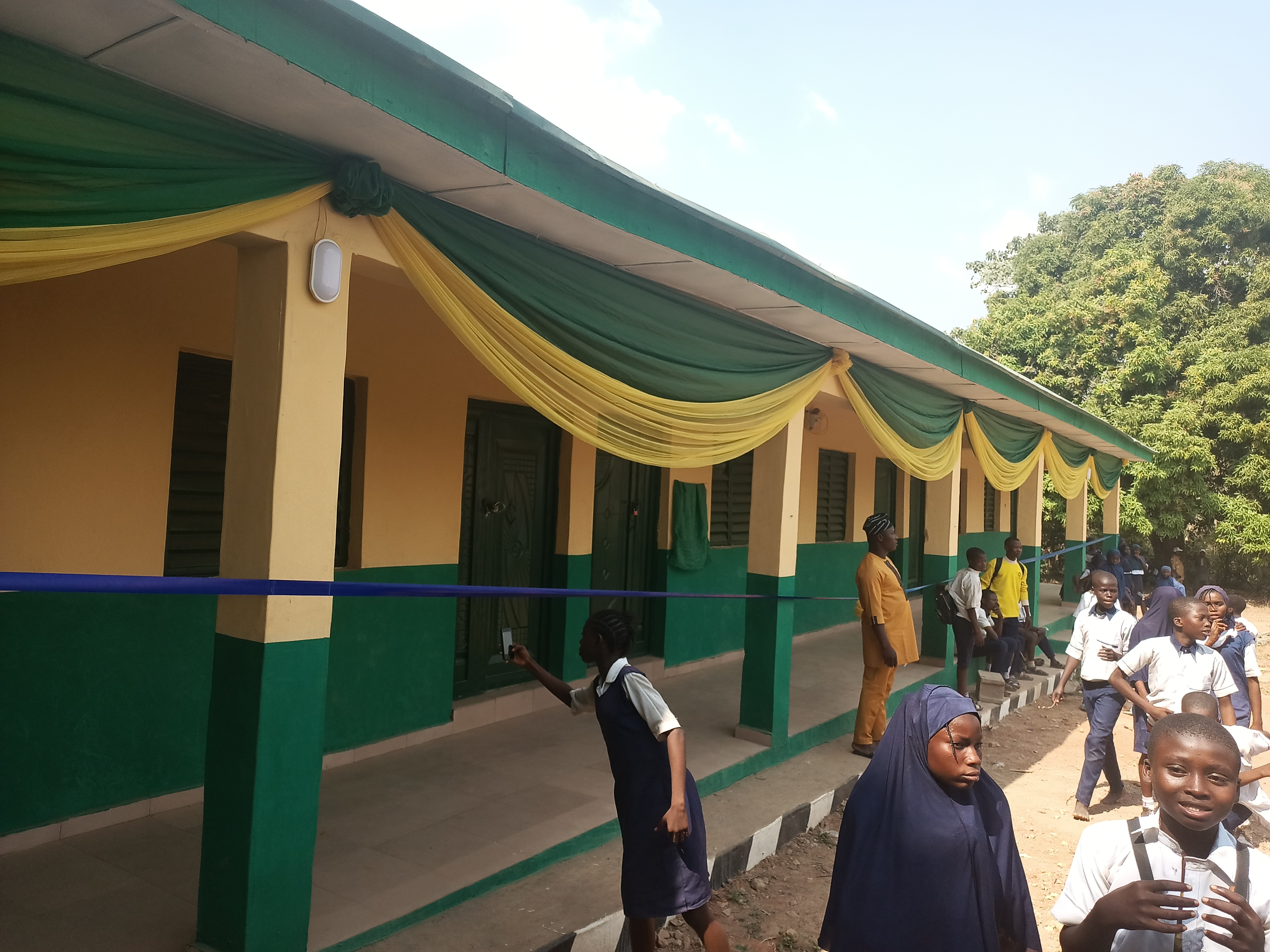 It was jubilation galore at the Sekona Grammar School, Sekona in Ede South Local government area of Osun State as the lawmaker representing Ede North/Ede South/Egbedore/Ejigbo federal constituency and candidate of the People’s Democratic Party in the February 25 election, Representative Bamidele Salam commissioned a block of three classrooms he facilitated for the school.

The commissioning, which was done by Alhaji Kazeem Akinleye, the Chief of Staff to Governor Ademola Adeleke, coincided with the second term campaign of Salam in some wards of Ede South Local government.

According to the Principal of the school, Mr Surajudeen Sodiq, the block of three classrooms by the lawmaker is the first infrastructural project witnessed by the school in the last fifteen years.

He expressed the appreciation of over 700 students, who have been yearning for new environment to learn. The principal added that the facility will also increase the enrollment of students in the school.

“In the last fifteen years, no single infrastructural project has been done in this school. No building erected. I think this is as a result of the political leaning of Sekona but we thank God that Hon. Bamidele Salam has remembered us. This will go a long way in aiding teaching and learning of the students. The building was built to taste as it’s equipped with necessary facilities. We appreciate the lawmaker for this project.”

Speaking with newsmen, the Chief of Staff, who was represented by his wife, Alhaja Balikis Akinleye described the revelation by the principal as saddened, stating that the government of the PDP has come to correct the injustice.

Akinleye said, “it’s saddened to hear such revelation from the principal. But the government of PDP is set to correct that. That has started by Representative Bamidele Salam and more will surely come their ways.”

Speaking on the second term ambition of Salam, Alhaja Akindele said she doesn’t believe the PDP has any serious opponent as his (Bamidele’s) achievements in his first term are enough to propel him far above any other candidate in the race.

After the commisioning, Salam’s train moved to inspect an ongoing road reconstruction project in Ede town. The road which has been in state of disrepair for several years, was facilitated Rep Salam.

According to an Okada rider, the road is an important one as it leads to both Adeleke University and the Federal Polytechnic. He said it has become a source of concern to everyone passing through it.

“We thank Rep Bamidele Salam for fixing this road for us. It is an important road but it has become a source of concern to many us plying it. Severally, we have called on past government to help but they didn’t. Today we thank God.” Said the Okada rider simply identified as Muftau.

InsightMedia gathered that the lawmaker has attracted road projects that worth close to N1bn to the four local government areas and many of them are ongoing.

Speaking with InsightMedia, the Director General of Bamidele Salam Campaign Council, Dr Bashiru Tokunbo Salami narrated how the commisioning of projects has made the job of campaign council easy. He said the achievements and tracked record of Salam has made the job canvassing for votes and supports for Salam less cumbersome.

BT Salami, who believes that his candidate has “no viable opponent”, said the second term of Bamidele Salam will help consolidate on the jobs he has done so far.

The campaign train landed in Akoda Ede before moving to Sekona when it was received by the Olu of Sekona, Oba Abdulwaheed Adebowale at his Palace. The campaign team was later welcome by party faithful and market women at the Sekona market.

Salam and his team also visited three wards in Ede to meet with part stakeholders and loyalists.

He promised to consolidate on his achievements, while calling on electorates to vote all candidates of the PDP in the coming elections.