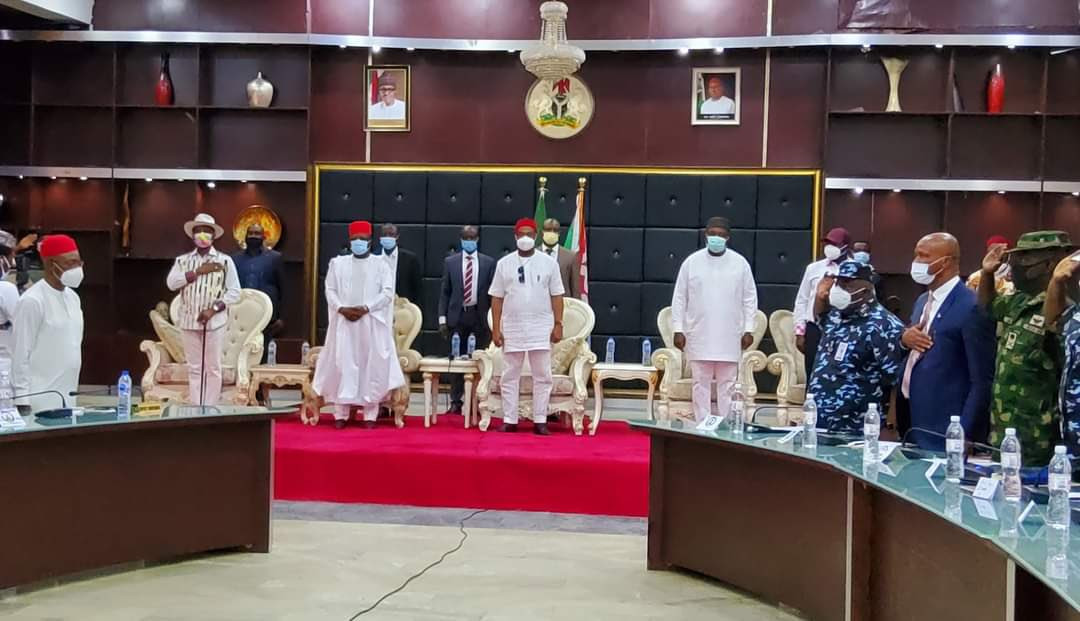 This was revealed on Sunday in communique read by the Chairman of the south east governor’s forum and Ebonyi State Governor, David Umahi after a meeting in Owerri.

The governors, who condemned the attacks on police stations, correctional facilities and other government properties, said they have consulted widely within the region before the establishment of the outfit.

After exhaustive discussions on the current security challenges in the South East and with valuable contributions from participants at the first South East security summit in Owerri on this day Sunday April 11th 2021, it was resolved as follows:

1. To strongly and unequivocally condemn terrorism and banditry in any part of Nigeria, particularly in the South East. The meeting strongly condemns the burning of police stations, violent attacks on custodial centres with the unlawful release of inmates, and the killings including security personnel, natives/ farmers and headsmen.

3. That the political leadership in the South East has resolved to bring together all the arsenals at their command, as one united zone, to fight and flush out criminals and terrorist from the zone.

4. That the summit resolved that to achieve this, there is a need to galvanise all the relevant stakeholders in the south east, the political class, the business community, the bureaucrats and the intelligentsia to provide all necessary support to security operatives in the five south east states to ensure total success in the fight against criminality in the zone.

5. That the heads of all the security agencies in the south east have resolved to exchange intelligence in a seamless, effective new order that will help to checkmate crime in the zone.

6. That to fast track crime-busting in the south east, the heads of security agencies have been mandated to draw up a comprehensive list of their logistics and material needs for sustainable success in the fight against criminality, for the immediate provision by the leadership of the South East.

7. That a committee made up of security personnel, government officials and relevant stakeholders be set up to coordinate and monitor the implementation of the south east joint security platform.

8. To applaud the initiative of the South east security summit and to make it a statutory summit that will convene every quarter while its hosting shall rotate among the five south east states.

9. The meeting resolved to maintain a joint security vigilante for the South East otherwise known as Ebube Agu.

10. The meeting appreciated the formation of South East joint security outfit co. Named Ebubeagu. Headquarters in Enugu to coordinate our vigilante in the South East.

11. South East Governors requested the Acting IGP to stop the influx of IGP monitory units but to allow cps and state and Zonal commands to handle their cases.

12. Meeting approve that the acting IGP and other security chiefs do invite the leadership of Ohaneze Ndigbo and CAN to find out the reason for increasing insecurity of the South East .

13. Meeting agreed that military policing in the South East should be adequately funded and become effective.

14. Meeting agreed that open grazing has been banned and security agency should implement the ban.

15. The meeting encouraged a peaceful coexistence of farmers and headers to allow Governors to succeed in the fight against criminality.