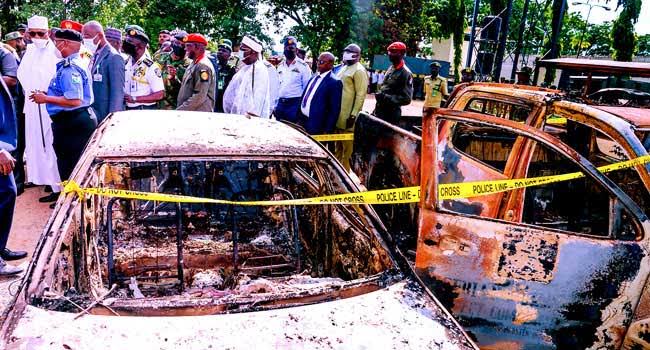 Two officers of the Nigerian Police Force are currently in detention over the invasion of Kuje Prison in Abuja.

Terrorists, who overpowered security operatives at the prison on Tuesday night, released over 800 inmates, including all the Boko Haram suspects in detention.

The attack sent a wave of shock across the country.

When he visited the scene on Wednesday, President Muhammadu Buhari expressed disappointment with the intelligence gathering system.

“I am disappointed with the intelligence system. How can terrorists organise, have weapons, attack a security installation and get away with it? How did the defences at the prison fail to prevent the attack? How many inmates were in the facility? How many of them can you account for? How many personnel did you have on duty? How many of them were armed? Were there guards on the watchtower? What did they do? Does the CCTV work?” Buhari had asked.

In a footage on Wednesday night, the terrorist sect showed some of its men shooting their way into the facility.

Tens of fighters were seen marching in groups while vehicles and building were on fire in the 38 seconds video.

An elderly man dressed in a native attire also joined the young men who were shouting on top of their voices.

The Islamic State’s A’maq Agency released the video with the caption: “Fighters of Islamic State attacked Kuje prison in Abuja yesterday and succeeded in freeing dozens of prisoners.”

Daily Trust gathered that the two police officers were nabbed after their communication with some of the escapees was intercepted.

“Two of the terrorists that escaped called a police investigation officer (IPO) in one of our stations and spoke to him in a compromising manner…They are now being investigated to know their level of complicity,” the source said. (Daily Trust, except for amended headline)