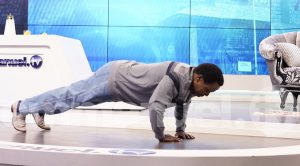 Lagos State Gov. Babajide Sanwo-Olu and his Ondo State counterpart, Mr Rotimi Akeredolu, on Friday eulogised the late Prophet T.B. Joshua as he was laid to rest in Lagos.

The governors, who were at the burial ceremony of Joshua, Founder of the Synagogue Church of All Nations (SCOAN), Ikotun, Lagos State, said that the church should follow his footprints.

The News Agency of Nigeria (NAN) reports that Joshua, who was endeared to many people by his healing and deliverance ministries, died on June 5 after a church service.

Sanwo-Olu said at the event that Nigeria and the entire world had lost a rare prophet.

He was represented by the state Commissioner for Home Affairs, Mr Olarenwaju Elegusi.

The governor said that the SCOAN founder lived a purposeful life.

According to the governor, Joshua will be remembered as a general in God’s vineyard and someone who dwelt among commoners but became uncommon.

“He toed the line of St. Paul in his ministry, combining faith and work to get people out of the wools.

“As a people, we have benefitted in one way or the other from his humanitarian service that he openly gave to all and sundry across the globe.

“As a people, we must be determined to profess and put in practise, unity, love and tolerance for one another the way the late prophet lived for us, to advance our society and gain salvation,” Sanwo-Olu said.

In his tribute, Akeredolu described the demise of the prophet as a huge loss to humanity.

Akeredolu also described the SCOAN founder who hailed from Ondo State as someone with uncommon gift from childhood.

“He started early to perform wonders among his peers right there in his native town.

“ He would tell his peers that something was going to take place in so and so time, but his friends would doubt him until when the time came and what he said would come to pass.

“His miracle and prophesy lifestyle was not a fluke as being viewed in some quarters.

“The man paid the price before reaching stardom,” Akeredolu said.

The governor said that the positive impact of Joshua’s mission was visible in many communities.

“Even as a person, I benefitted from his largesse as a governor-elect; he gave me cash to assist me to entertain guests before my inauguration.

“He is one who did not forget his roots, as he contributed well in making life better for his people in Ondo by giving scholarships to indigent students, paying huge electricity bills for four LGAs in Ondo, and providing transformers for them to restore electricity,” he said.

The governor said that Joshua’s lifestyle was worthy of emulation.

Akeredolu said that Joshua’s love for the less privileged inspired him into social service ministry that resulted in the growth of his church.

He said that Joshua’s legacies should be supported to continue to grow in spite of his departure.

The governor urged Nigerians to look inwards and develop their God-given gifts for the benefit of the society. (NAN)