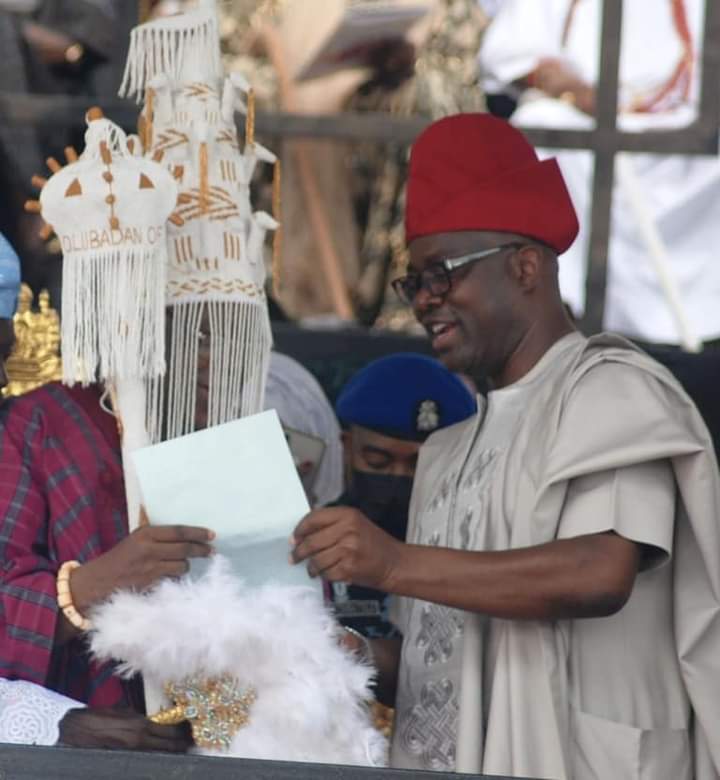 Oba Mohood Olalekan Ishola Balogun Alli has been crowned as the 42nd Olubadan of Ibadan land.

The official installation of the paramount ruler of Ibadan land held on Friday at the Mapo Hall in the Oyo State capital.

The new Olubadan, adorned with a white crown and wine traditional attire popularly known as ‘Aso Oke’, ascended the throne in grand style to usher in a new dispensation in the town.

Oyo State Governor, Seyi Makinde, presented the staff of office to Oba Balogun, now Okumade II, in the presence of prominent traditional and religious leaders from various parts of the country, as well as hundreds of residents of the state.

Some of the prominent traditional rulers physically present at the coronation were the Ooni of Ife, Oba Adeyeye Ogunwusi; Alaafin of Oyo, Oba Lamidi Olayiwola Adeyemi; the Sultan of Sokoto, Alhaji Sa’ad Abubakar III, and the Emir of Kano, Alhaji Ado Bayero, among others.

The Vice President, Professor Yemi Osinbajo, and former Vice President Atiku Abubakar were also among the political leaders who graced the occasion.

The late monarch who was crowned on March 4, 2016, died two months ago at the University College Hospital (UCH) in Ibadan. He was aged 93 years old.

Following his death, Oba Balogun emerged as the next Olubadan, but not after a controversy over who would succeed Oba Adetunji.

But the controversy was finally put to rest last month after Governor Makinde named Oba Balogun as the next paramount ruler of Ibadan land, following a recommendation by the Olubadan-in-Council.

“The appointment is in line with the Olubadan of Ibadan Chieftaincy Declaration, as well as the unique and time-tested tradition of our people.

“On behalf of the government and good people of Oyo State, I wish the newly confirmed Olubadan a successful reign blessed with peace and unprecedented progress,” the governor had said in a statement by his Chief Press Secretary, Taiwo Adisa. (Channels TV)