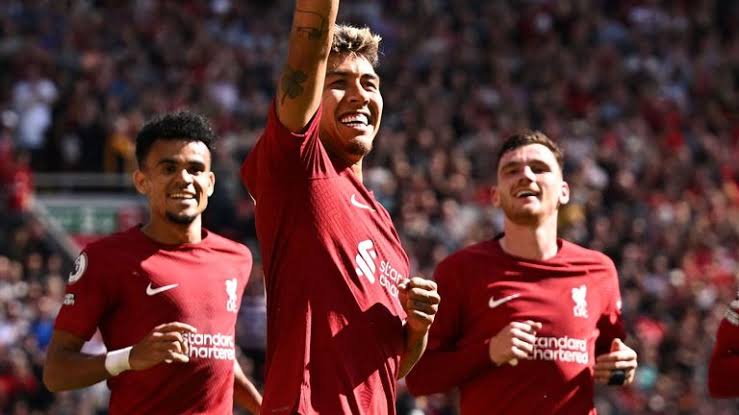 Liverpool scored nine goals against Brentford at Anfield to record first win of the season after  four matches.

Luiz Diaz and Roberto Firminho bagged brace each while Virgil van Dirk, Elliott, Trent Alexander-Arnold and Freitas Calvaho scored one apiece and one own goal recorded.

Manchester City proved their class as they came from two goals down to defeat Crystal Palace at Etihad Stadium.

10-man Chelsea showed commitment at Stamford Bridge to see off Leicester City. The Blue were a man-down from 28th-minute when Conor Gallagher was shown second yellow card.

£50m summer arrival, Raheem Sterling’s deflected effort looped into the top corner to put the hosts in front 67 seconds after the interval before doubling their lead from Reece James’ inviting ball, much to the relief of Conor Gallagher.

Harvey Barnes scored four minutes after Sterling has doubled the lead but it was just enough as consolation for the Foxes, who waisted few chances they had.

Elsewhere, Brighton continued their fine start to the season with a lone-goal win over Leeds United at home. Brighton set a new club record of nine consecutive top-flight matches without defeat as they condemned visitors Leeds to a first loss of the season.

Pascal Gross’ winner – a powerful right-footed strike into the far corner from a Leandro Trossard pass – came after Brighton had spurned several golden opportunities to take the lead.

Anthony Gordon had put the Toffees on course for a much-needed victory, firing home a well-taken opener after 24 minutes.