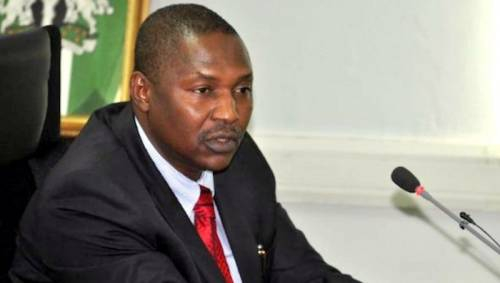 The Attorney General of the Federation, Abubakar Malami, has responded to the criticism from South-West governors over the deployment of police officers to Magodo estate in Lagos State.

Malami, in a statement by his spokesman, Umar Gwandu, noted the controversy ensued over a failure of the Lagos government to follow through with a Supreme Court judgment.

“It is a common knowledge that execution of the judgment and orders of courts of competent jurisdiction and the court of last resort in the circumstances remains a cardinal component of the rule of law,” he argued.

Mr Malami added that the office of the attorney general “wonders how maintenance of the law and orders in the course of execution of the judgment of the supreme can be adjudged by (the) imagination of the governors to be unruly.”

He further stressed that “sanctity of the rule of law is not a matter of choice.”

Mr Malami stated that he was displeased with “the South-West governors’ unjustifiable insinuation of impunity against the office of the attorney general over (the) execution of a judgment of the Supreme Court.”

In a statement signed by Governor Rotimi Akeredolu, the South-West governors had on Wednesday faulted the alleged roles of the IGP Usman Baba and Mr Malami.

The race for possession of Magodo began in 1988 when the Shangisha Landlord Association challenged the Lagos government. After multiple proceedings at the high court, the appeal court and the Supreme court, it was ruled that members of the association should be given 549 plots of land in the area.

“We condemn, in very clear terms, the role of the Attorney General of the Federation, Mr Abubakar Malami, in this act of gross moral turpitude,” said the governors.

On Wednesday, Governor Babajide Sanwo-Olu intervened in the Magodo Phase 2 Estate controversy during a stakeholders’ meeting with Magodo residents, judgment creditors, members of Nigeria Police from the office of the Inspector General of Police Usman Baba, and members of the state executive council.

On Tuesday, Abimbola Oyewole, a chief superintendent of police, led policemen to take over the Magodo Phase 2 Estate, causing unrest as landlords and tenants panicked.

The officers defied Mr Sanwo-Olu’s orders to vacate the estate.

Mr Oyewole had told the governor that the armed cops were at the estate on the orders of Messrs Baba and Malami.