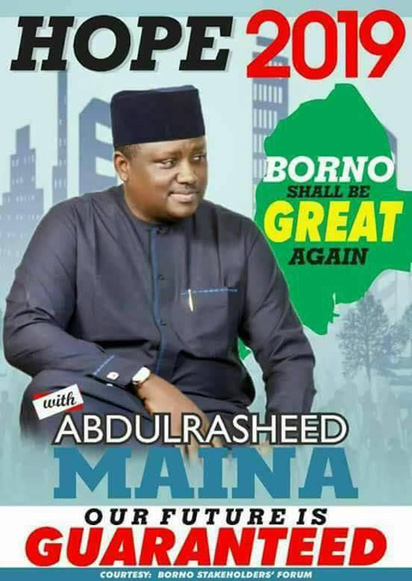 The posters of the run-away former chairman Presidential Task Force on Pensions reforms, Abdulrasheed Maina, has flooded the Abuja and Kaduna metropolis.

It will be recalled that President Muhammadu Buhari has order his removal from civil service and he has since then taken to his heel, but his fmaily members have on Wednesday risen in his defence. They said their son is never a criminal and has never involved in any fraudulent acivity.

At a news conference in Kaduna on Wednesday, the spokesman for the Maina family, Malam Aliyu Maina, flanked by Salihu Maina and Ladan Abdullahi, vowed to expose those in the Presidency behind his ordeal. Aliyu Maina said, “The entire family of Abdullahi Maina is categorically stating that our son is not in any way a fraudster, rather he is a messiah who brought reforms into Nigerian Pension Scheme, whose effort saw the disappearance of pensioners roaming the streets of Abuja and other state capital in Nigeria. “It is on record that Abdulrasheed Maina’s reform put to a stop the fraudulent withdrawals of huge sums from both the Nigerian Pension Board, the Nigerian Police Pension Board etc. Perhaps it is this noble efforts that made him enviable to the present administration when they came into power to convince him to come back and assist in its “change” agenda.” He said they had noticed the recent attempt by the cabal to ridicule and tarnish the image of Maina family.

“The cabals have gone to the extent of marking our house in red paints with an inscription of EFCC under investigation. The EFCC is wrong in their action because Abdulrasheed inherited so many properties from his late father in Kaduna and Abuja, some of them were built before he was born so how could he have acquired them fraudulently? “We are aware that all this act of calumny is not targeted against Abdulrasheed Maina alone but against the President of Federal Republic of Nigeria and the office of the Attorney General. We have contacted our lawyers Messrs Mamman Nasir & Co and instructed them to act appropriately. “We equally know that Abdulrasheed Maina is in possession of many facts that are against the cabal and interesting to the Nigerian populace, which he will disclose very soon,” the family boasted.